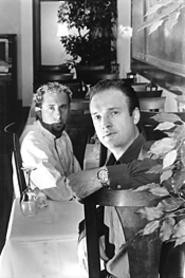 Walter Novak
Dominic Dasco (left) and Tracy Roadarmel are making Canton a fine-dining destination.
Like finding a ruby at the bottom of a Cracker Jack box, discovering Peter Shear's in desolate downtown Canton seems too good to be true. This is, after all, a city where some of the most beautiful downtown buildings are boarded up and for sale, and where the only foot traffic on a Saturday night comes from kids circling the bus stop. But scoff not, doubtful ones: Despite its unlikely location, this atmospheric, upscale restaurant is entirely for real.

Admittedly, Peter Shear's began as a figment of owner Tracy Roadarmel's ambitious imaginings. If anyone should know the risks involved in opening a fine-dining destination, it's this Canton native, who served as food and beverage manager for the Cleveland Ritz-Carlton when it first came to town, as well as guiding light for restaurants in such locales as San Francisco and St. Maarten. Nevertheless, Roadarmel willingly staked his reputation and his bankroll on the belief that diners would schlep into town to ogle his renovated Italianate building and feast on updated Continental cuisine. (And if, in the process, the business somehow managed to spark a downtown revival, well, that would be the ganache on his torte.)

Happily, in the 10 months since Peter Shear's opened, Roadarmel has seen his fantasy approach reality. Canton hasn't yet become the new Paris, of course, but at least his own business is booming, with the restaurant on the receiving end of positive critical attention from regional diners and media alike. Even though members of the black-garbed waitstaff still feel the need to automatically define exotic terms like "panko" and caution diners to not eat off the service plates, even though a uniformed officer is stationed in the gravel parking lot to provide security, and even though the guests are as likely to be wearing denim as dinner jackets, this has clearly developed into a spot of both gusto and grace.

Much of the credit must go to Peter Shear's culinary consultant and opening chef, Gary Bessette, who ran the kitchen at the Ritz-Carlton during Roadarmel's tenure there. (Bessette has since moved on to the Club at Hillbrook in Chagrin Falls.) He and Roadarmel developed a concise, well-organized menu of richly prepared steaks, chops, seafood, and pastas -- a repertoire now tweaked by Bessette's successor, Executive Chef Dominic Dasco. Throughout the menu's evolution, though, there has been no attempt at dumbing-down the offerings in light of the locale. Rather, the fare includes relatively challenging, contemporary dishes like tuna sashimi, duck pierogi, and charbroiled venison chops. Portions are ample, but not eye-popping; plate arrangements are sophisticated, but not self-consciously clever; and flavors, goosed with butters, oils, reductions, and glazes, often go right through the roof.

Take, for instance, a Saturday-night special of thick, boneless rib-eye steak, dipped in soy, chargrilled to a chef-recommended medium-rare, slathered with garlic-herb butter, and showered with homemade truffle-oil-infused potato chips. In no time at all, everything on the plate -- including a bed of roasted potato wedges and lush julienned baby vegetables -- was permeated by the commingling flavors of beef jus, butter, and truffles, creating a taste incomparably bold and brawny.

Then, there was that astonishingly rich but remarkably light Lobster Linguine, each firm, saffron-seasoned pasta strand stroked with satiny, citrus-scented butter cream and tossed with chunks of sweet lobster meat. And let us not forget the ephemeral roasted duck pierogi: crisp and delicate in their savory natural reduction, on a tangle of seductively pliant, breaded and fried onion strands; or the tender escargot, resting beside triangles of perfect puff pastry, in a sweet, fruity, port-enhanced beurre rouge.

Beyond its obsession with big flavors, Peter Shear's also cares about the little details. Warm slices of freshly baked bread are tucked into a white linen napkin inside a dainty wire basket and arrive with a ramekin of frothy garlic butter. Four caramelized, candy-sweet, dry-packed sea scallops (part of another dinner special) are served in a natural seashell. A smooth Chocolate Martini ($7), humming along on Godiva chocolate liqueur, Stoli Vanilla, Cointreau, and crème de cacao, comes in a chocolate-sugar-rimmed glass. And when we asked if the kitchen would mind splitting a meal-sized Warm Goat Cheese Salad for us, with its pristine baby lettuces, toasted pine nuts, and fresh and sun-dried strawberries, both plates arrived as carefully arranged and beautifully garnished as if they were individual entrées. (All this was done at no additional charge, incidentally, and points to the fact that Peter Shear's, if not exactly inexpensive, is reasonably priced compared to some of its Cleveland-area equivalents.)

That type of attention to detail finds its reflection in the painstaking renovations Roadarmel undertook in the physical space. The building dates back to 1872, when it was the property of its namesake, Peter Shear, and with its handsome facade and sturdy construction, it was no doubt the pride of its block. But 130 years is a long time, even when measured by brick and mortar, and the space was practically a ruin when Roadarmel acquired it in 2001.

To take advantage of the original stone and brick foundation, he tucked the main dining room, bar, and kitchen into what is essentially the building's basement, filling the eating area with high-backed booths, warm wood floors, and white linens, for a cozy, urbane ambiance. A curved, carpeted stairway leads up to the ground floor, where there is a bright, high-ceilinged room dominated by an original wall-spanning mural that workers discovered during the reconstruction. This room evokes a more elegant, old-world flavor, with its dark walnut chairs, faded Oriental carpets, and classic statuary, and it is reserved mainly for private parties and the ever-more-frequent overflow crowds on weekends. A fenced and landscaped street-level patio provides outdoor seating in season. And finally, each of two minuscule, below-ground cellars (once used for coal storage) have been newly equipped with carpeting, piped-in music, and a candlelit table for two, creating what must surely be the most romantic and unusual dining space in all of Stark County -- just watch your head when you try to stand up!

The restaurant has a solid wine list, filled with distinguished names like Merryvale, Opus One, and Far Niente. Although prices occasionally top $100, there are plenty of good selections in the $20 to $40 range and about a dozen more available by the glass. The menu also features Voss bottled water as an alternative to l'eau de Canton, and when a lunch-hour server mistakenly poured Voss into our half-empty glass of Lagaria Pinot Grigio ($5), we got a good chuckle, as well as a replacement glass of wine, out of the incident.

If the kitchen has one weakness, it's in its desserts. In contrast to the precision that goes into appetizers and entrées, the sweet endings seem almost like the kitchen's stepchildren. A stale pinwheel of limp puff pastry marred a festive-looking toss of fresh berries and sweet vanilla cream, for example. And Peter Shear's version of Bananas Foster, with too little ice cream, too much soupy caramel sauce, and a superfluous berry-filled phyllo cup, needs some rethinking.

But that's a minor complaint. All things considered, Peter Shear's is not just a welcome arrival for Stark County; it's a worthy addition to the entire Northeast Ohio dining scene and one that seems destined to finally put Canton on the culinary map.