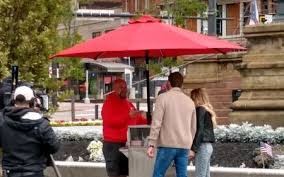 Courtesy of the Ad Com Group
The pierogi cart that appeared on the recent episode of The Bachelor that was filmed in Cleveland will make a special appearance on Saturday at the Brite Winter Music Festival that takes place on the West Bank of the Flats.

During the episode, Peter Weber and contestant Kelsey Weier explored downtown Cleveland on a one-on-one date. They walked to Public Square where they were greeted by a polka band, couples dancing and a mysterious street vendor selling pierogi because, you know, that's what goes down on a daily basis at Public Square.

Clevelanders know that no such pierogi cart exists — it was simply created for the TV show. But to capitalize on the cart’s notoriety, the Brite Winter team tracked down the vendor, who is real, and asked "Pierogi Joe” Becker to appear at the festival.

“We’re excited to bring this made-for-TV moment to life at Brite Winter this weekend and give fans of the show, of Brite, of pierogi, and of Cleveland something else to look forward to,” says Morgan Passek, a Brite Winter spokesperson, in a statement.

Becker, who hails from Slavic Village and normally operates his pierogi business out of a food truck and not a cart, was thrilled to accept.

“Fans of the show were disappointed to hear that the pierogi cart didn’t exist, so it has been fun to work with Brite Winter to make this happen,” says Becker. “I look forward to folks being delighted to discover the cart. We’ll be serving up the same delicious food as always from both the cart and our truck with plenty to go around.”

Jeff has been covering the Cleveland music scene for more than 20 years now. And on a regular basis, he tries to talk to whatever big acts are coming through town, too. If you're in a band that he needs to hear, email him at [email protected]
Read More about Jeff Niesel
Scroll to read more Food News articles