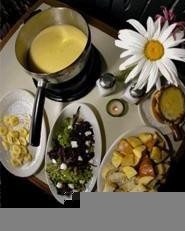 That's been the case since 2002, when Cleveland artist, designer, and francophile Denajua launched Le Oui Oui as a vendor's stall in the now-defunct Market 25. By 2003, business was good enough to prompt a move into permanent quarters on Fulton Road, where fanciful decor of shabby chic luxe did the tiny space proud. Regardless of the trappings, though, there was just no getting around the fact that Denajua was a free spirit. She kept hours that shifted like the weather, and her crêpes were known to vary from sheer perfection to spongy blobs. And then, as suddenly as it had possessed her, the thrill of crêpemaking apparently departed: Denajua sold the business and headed back to France.

That's the heritage that has been passed on to Michael Crowdes, a marketing guy and dedicated foodster who became the café's third proprietor in January. While admitting he harbors "no particular illusions" about his abilities as a chef, he is profoundly sincere about his love for good bistro grub and his desire to see the café thrive. Over the past six months, he's extended Le Oui Oui's hours to include lunch, dinner, weekend brunch, and morning coffee service; squeezed a few more functions out of the minuscule open kitchen; and gradually expanded the menu of sandwiches, salads, fondue for two, and sweet and savory crêpes.

Disclaimers to the contrary, Crowdes is a craftsmanly cook, and his food is well prepared and tasty. That hasn't escaped the members of his growing fan club, who regularly cram into the 20-seat cafe like Tokyo commuters on a bullet train. How crowded is it? Try a 45-minute wait for a table during a recent Sunday brunch and a pace so unrelenting that the harried dishwasher (whose noisy workstation is crammed into the front window) couldn't keep up; as a result, the café ran out of clean glasses, and guests thirsting for a sip of H2O were temporarily SOL.

Also, the waffle iron was broken, so the possibility of digging into Crowdes' fluffy Belgian waffles was off the table. And in the time it took the beleaguered chef to whip up our crêpes, we had plowed through the entire Sunday PD and were starting The Beacon Journal.

Once the crêpes did show up, they were fabulous: rich, moist, yet paper-thin, and generously filled with evocative flavors. A mere nibble of the tomato, spinach, and fresh mozzarella version, topped with homemade green-olive tapenade, summoned memories of sun-drenched summer gardens; and a sturdy cremini-and-Roquefort-stuffed number, fortified with the addition of two scrambled eggs, immediately set us to singing of dark, shadowy forests.

At lunch, the repertoire includes such traditional tidbits as salade Nicoise, with yellowfin tuna; a toasty ham, Gruyère, and béchamel-slicked Croque Monsieur; and a mellow, cheese-draped rendition of French onion soup.

Come evening, for parties of two or more, Crowdes adds that engaging four-course, prix fixe fondue feast. It begins with his homemade onion soup, moves on to an impeccable mesclun salad piqued with dried cranberries, walnuts, and chèvre, then lingers over a sleek Gruyère-and-Emmenthal fondue, accompanied by a small mountain of juicy apple slices, crusty French bread cubes, and roasted redskin potato slices for dipping.

The final course offers a choice of 10 sweet crêpes, including specialties like the Orange Trio, with freshly sliced oranges and a splash of Grand Marnier; the dark chocolate, with a luscious filling of semi-sweet Belgian Callebaut; and the chèvre and strawberry combo, with fresh berries and lightly sweetened goat cheese. Each one is as light and dainty as anything that ever rolled off a rabot.

Admittedly, for a meal built around Gruyère, the appearance of cheese in nearly every other course can seem like overkill. But that's a minor quibble. A larger consideration is this: At $25 per person, plus a couple cups of café au lait, a bottle of Chateau Lamothe de Haux (a crisp, refreshing French white, and a fine foil for fondue), tax, and a tip, our tab for two came to more than $100. Yet at that price, the crowding, slow pacing, and barebones amenities (paper napkins, flimsy flatware, lack of clean water glasses) seem more irritating than charming.

Happily, there's hope. Crowdes says he wants to move a few doors down the street to more spacious digs, where he could double his seating, expand his kitchen, and add a small bar. Those upgrades would certainly help smooth out the rough spots -- as would sinking a few more bucks into better appointments.

Until then, though, Crowdes and his guests are stuck with a conundrum: At what point does quirky becoming dysfunctional -- and just how much of it would you endure to score a perfect crêpe?