Matt Damon plays an assassin trying to find himself. 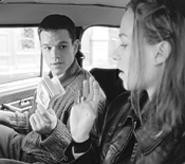 Damon and Potente are on the money as Bourne and Marie.
The plot of The Bourne Identity is astonishingly straightforward. It is bereft of twists (instead, we're offered tangible explanations), free of the gaping plot holes that swallow confused viewers, and absent the cynical machinations of filmmakers who believe that, to entertain, it's necessary to also bamboozle. This adaptation of Robert Ludlum's 1980 novel, written by Tony Gilroy and William Blake Herron and directed by Doug Liman (Go and Swingers), is almost anachronistic, a vestigial remnant of 1970s spy-game thrillers, in which the paranoid were almost always right -- someone was out to get them, usually their best friends and bosses. It reminds one of Three Days of the Condor, The Parallax View, and even Sam Peckinpah's The Killer Elite, so much so that it plays almost antiquated by today's lowered standards. Strip away the few notes of techno that skitter across the soundtrack, and you're left with a rather contemplative film -- a thriller of gentle nudges.

Adapted once before, in a drab 1988 made-for-TV miniseries starring Richard Chamberlain, the Ludlum novel serves only as loose source material. Long gone, for instance, is Carlos, the assassin who appears throughout Ludlum's novels, including two more with CIA agent Jason Bourne. Liman and his screenwriters have stripped the book bare, turning a cruise ship into a speedboat. Ludlum, who died last year, was the master of pretzel-logic thrillers. Here, the filmmakers have untangled the knots and dangled the novelist's hero from a long, straight rope.

The film begins as Jason Bourne (Matt Damon) is being pulled from the Mediterranean Sea by fishermen who mistake him for dead. He is, in a sense: Bourne, or whatever his name really is, has no knowledge of who he is or what he does. He lacks identification, save for two bullets in his back and a laser device embedded in his hip, which reveals the name of a bank in Zurich and an account number. The audience, however, knows immediately whom he works for and what he's up to: We're introduced to Conklin (Chris Cooper), a gruff CIA boss (and modern-day cinema's oldest prototype, the malevolent government stooge) prone to barking short, sharp orders ("Get it done! Get everybody up! Work it!"). Conklin has botched an assassination attempt on an exiled rebel leader (Adewale Akinnuoye-Agbaje, Oz's Simon Adebisi), who is threatening to out the CIA and its dirty work. Bourne was the operative in charge of the hit, and now he's presumed dead or dirty. The rest of the film is little more than a chase. Bourne and his reluctant passenger, Run Lola Run's Franka Potente, try to simultaneously elude Conklin and his cronies (including Croupier's Clive Owen and Julia Stiles in, essentially, prolonged cameos) and figure out just who the hell he is.

The first scenes in which Damon struggles to remember his identity are well played. He asks himself who he is, over and over, in various languages (French, German), and the questions roll from his tongue in such a way as to suggest he doesn't even realize he's not speaking English. He's lost his name, but not his identity; if he doesn't know who or quite what he is, he at least knows what he is capable of. ("I know that at this altitude, I can run flat out for half a mile before my hands start shaking," he explains. "How can I know that, but not know who I am?") Damon looks lost and dazed, but never frightened, as though somewhere in Bourne's broken mind he retains fragments he's actually trying to forget. In the film's earliest scenes -- on the fishing boat, in a speeding train -- Damon never catches a clear glimpse of himself. In the reflections from a grimy mirror and a train window, he's fuzzy, distorted -- a man who can't even tell what he looks like. When he does realize he's an assassin, he's disappointed and even ashamed; amnesia, once more, renders the nasty man a compassionate one.

Save for two action sequences so outrageous, the apologist is tempted to dismiss them as parody, The Bourne Identity almost feels as though it were filmed in slow motion, yet it never drags. In no hurry to conclude its pursuit, even a car chase through Paris plays measured, leaving only dents and thuds instead of crashes and flames. It's sharp enough to spoof the form (Potente, as wandering soul Marie Kreutz, mocks Bourne's undercover acumen by carrying out a dirty deed in plain sight), but never so cynical that it feels the need to mock. And the considered pace serves to bond Damon and Potente, who say little to each other -- that she's merely with this man implies extraordinary trust -- yet become lovers long before they fall into bed. In one scene, he dyes and cuts her hair to disguise her, and when they finally kiss, it seems oddly redundant.

The filmmakers never feel the need to fill in the blanks, not even Bourne. They hint at things -- why, for instance, an assassin abhors guns -- without being explicit. Through effective use of Clive Owen, whose few lines sound like poetry, they even suggest the trained killer's guilt without spelling it out. That makes it not only an exceptional thriller, but a transcendent summer movie: It assumes, for two hours, you have brain and heart enough to stick with a film that doesn't condescend, doesn't beat you up, and doesn't dumb you to death.