'Coco' Focuses on Mexican Traditions With Care, and the Spanish Dub Emphasizes Its Emotional Core 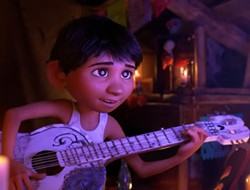 DISNEY PIXAR
Disney Pixar’s Coco has become the biggest box office hit in Mexico's history, with $43 million in ticket sales to date. In the U.S., it’s currently holding a tight grip at the box office as well.

I went to watch Coco with high hopes. My aunt bestowed enthusiastic praise after the film's October release in my hometown of Juarez prior to our Dia De Los Muertos celebrations. Despite the 21 growlingly long minutes of the Frozen short that left me confused with its inclusion at the start of the screening, it was clear that director (and Cleveland native) Lee Unkrich and co-director Adrian Molina did their research. Coco’s colorful opening scene set the stage for what I thought would be nothing but a tearful, joyful stroll down my childhood memory lane.

Even La Chancla, the most feared legend in Mexican culture, made an appearance on the big screen. This is the best time to tell you that your semester of high school Spanish will sure come in handy; the movie is bilingual, after all. There were many things I thought were unique about the script, such as its inclusion of the Mexican golden-age cinema references in the character Ernesto De La Cruz, inspired by Pedro Infante and Jorge Negrete. Cameos by El Santo, Cantinflas and La Doña herself, Maria Felix – alongside, of course, Frida Kahlo — made me feel very nostalgic, especially with the music! The songs, such as Mama Imelda singing well-known folk song “La Llorona,” were catchy, infectious and haunting.

The story is dynamic, cresting with a huge twist (cue the audience saying “ANDALE!”) amid its climactic moments, another entertaining nod to the telenovelas my abuela used to watch. In my opinion this movie was made for Latino audiences — they were not the afterthought but the focus with jokes for young and old. But make no mistake: By the end of the film I was a weeping mess with all the warm feelings of pride in my Mexican heritage.

A few weeks later I caught wind that Coco would be shown in Spanish, and being its first week of Spanish release in Cleveland I made a point to head to Tower City Cinemas to watch the Spanish dub. I spoke to GM Jeff Belter, who stated that it was hard to gauge the attendance so far, as this is the first time they have tried this. He added there has definitely been good response to the film's showing.

He was very pleased to tell me that there are Spanish speakers in the theater who can help with logistics and translation if needed.

After following clearly posted signs in Spanish for the theater, I was surprised to have it all to myself. Viewers will be happy to know there is no Frozen short in the Spanish-dubbed film — it was straight to business.

The Spanish dub again echoed how the focus of this movie leans toward its Latino audience. Even more details jumped out the screen to me; the jokes and music landed more quickly and more earnestly, it seemed. Bring tissues, though, since the Spanish dub got even more emotional, as our language and our traditions show through clearly.

In parting: Just take the time to see Coco in Spanish or English, as this movie shows the dedication we have to our ancestry, and the respect to our story was kept very much in mind. I must say I can’t wait to see it again, as I will be humming "Remember Me" until I see it for the third time at the sold-out MOCA viewing with the director Lee Unkrich in the room. Feliz viewings, mi gente.