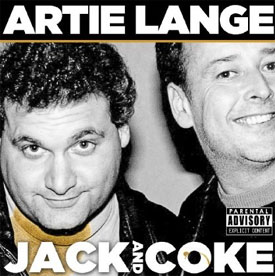 Best known for providing wise-ass remarks on The Howard Stern Show, Artie Lange, a former longeshoreman from New Jersey, has been a working comic since landing a role on MADtv in the earlier 1990s. He joined The Howard Stern Show in 2001, filling the position left vacant after Jackie Martling left the show. Often ridiculed for being overweight and out-of-shape (not to mention cantankerous and prone to causing trouble), Lange continues to work on the show despite having once turned in his resignation after a physical altercation with his personal assistant. He’s also had numerous substance abuse issues that have been well-publicized (and made him the butt of many of Stern’s jokes). Lange recently issued Jack and Coke, a live CD (the DVD version is slated to be out in January) and called to talk about the disc and his addiction problems.

How is it that Jack and Coke is your first-ever comedy CD?
I put out a DVD in 2004. It’s called It’s the Whiskey Talking. At the time, they said we could print a CD but they weren’t sure of the quality. So this is really my second stand-up project. The last five years, between the radio show and writing and touring and doing the movie and book, I’ve been busy. This is an hour and a half. It shows you how shitty I am when it comes to your comedy batting average. Between the two releases, there’s two hours and 20 minutes of stand up out there that I’m proud of. And I’ve written about ten hours of material. The combination of the road and morning radio hasn’t killed me, but it’s come close. If I keep doing it, it will kill me. This is everything I’ve been touring with for the past four years.