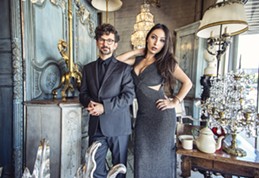 Actors Keith Gerchak and Marisa Guterman, both of whom live in Los Angeles, met a few years ago at an audition.

In the course of getting coffee after their audition, they came up with the concept for Lost & Found in Cleveland, a movie about five different people who try to have some items appraised at an antiques show.

They plan to shoot the movie here before the year’s end.

“I had always grown up watching an antique appraisal show,” says Guterman in a recent phone conversation. Gerchak is also on the line.  “When I was 16, I turned to my dad and said I thought it would be an idea for a movie. I kept it in my back pocket until one day fate interceded, and I met Keith in a Hollywood casting room. We auditioned for the same part — a short funny Jewish person. They didn’t know if they wanted a man or a woman. I asked Keith to write the script with me.”

A former Clevelander who only recently sold his Lakewood home, Gerchak thought Cleveland would make the perfect setting for the movie, which a press release describes as "Best in Show meets The Wizard of Oz." “It’s the perfect marriage of material and setting,” Gerchak says of Cleveland. “We wanted the film to be like Best in Show but not mockumentary style. We wanted to show the cross sections for the city and shoot in different neighborhoods.”

Shortly after deciding to set the film in Cleveland, Gerchak came here to visit his mom and took her to the William McKinley Presidential Library and Museum. Now, he's determined to use that location in the film. “I had never been there,” he says. “But I knew we just found the tone of the story. There were these two animatronics and a Wizard of Oz exhibit that explained how it was an allegory about the American Dream at the turn of the century. We wanted to do a yellow brick road to the road show.”

Thus began the four-year journey to make the movie. The two met a “financier” at the Sundance Film Festival, and he helped them find a director and cast.

“It took us six months to find the right director,” says Guterman. “It’s been a real rollercoaster of invaluable experience with a lot of mistakes. When we started, we thought it would take us a year. It’s been great to find the right locations and the right actors. We found the challenges really exciting. We have turned over every stone.”

The two can’t say who is in the cast yet, but they say they want to start shooting here “before the snow flies.” They say that locals will have a chance to appear in the movie and once they’re working here in town, they’ll cast a local 10-year-old boy to play one of the lead roles.

“Cleveland is playing itself for once, which is important” says Gerchak. “It often appears as New York or another city. Cleveland is incredibly photogenic and because we have five story lines that take place in different parts of the city, it needs that unique flavor that makes Cleveland the city it is. It’s the bowling alley and churches and Westside Market. We want to give people the opportunity to be in the film when we shoot some of the scenes.”