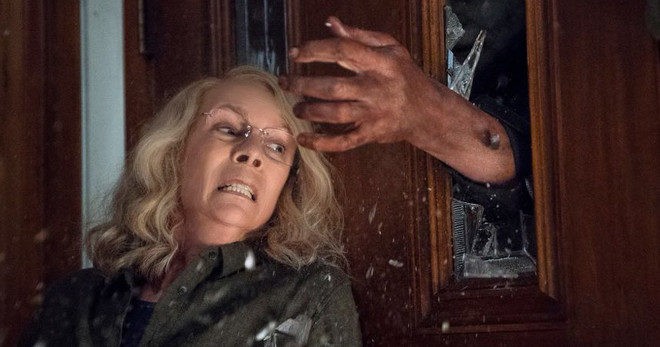 When we're first introduced to Laurie Strode, she's an insecure high schooler living in the sleepy suburb of Haddonfield, Illinois, worrying about her schoolwork, whether or not the guy she likes is interested in her and trying to figure out how she's going to keep a little boy hopped up on trick-or-treat candy occupied later that night when she's stuck babysitting on Halloween.

Unfortunately for Laurie, mocking the infamous and allegedly haunted "Myers' House" on her way to school, 15 years after a six-year-old Michael Myers brutally murdered his sister Judith, would make her a target for "The Shape," the fabled Michael Myers who has escaped from Smith's Grove Sanitarium and is out for blood.

Strode becomes the sole survivor of what would later be known as "The Babysitter Murders," as Michael's killing spree racks up an impressive body count, including four of Strode's closest friends. She manages to survive the ordeal, honestly, through sheer luck and determination and was last seen crying, declaring that "the boogeyman is real."

By completely ignoring the ten films that have been released between John Carpenter and Debra Hill's genre-defining classic Halloween (1978) and David Gordon Green and Danny McBride's direct-sequel Halloween (2018), Jamie Lee Curtis' Laurie Strode has finally been given the opportunity to shine as the true "final girl" she was always meant to be, forty years later.

Since the events of the original film, (again, we're completely ignoring the brother/sister story line of Halloween 2, the "Cult of Thorn" plot lines of Halloween 4-6, and all of Curtis' returns in the latter end of the pre-Rob Zombie reboot franchise), Laurie Strode has been irreversibly changed. While Michael Myers has been locked away and studied for forty years, Strode has been preparing. Her brush with death and traumatic experience has inspired a life of extensive weapons training, a custom-built compound complete with safe rooms and booby traps. In the process, she has completely isolated herself from the world around her, including her family.

Her obsession with Michael Myers has cost her two marriages and the custody of her only daughter, a sacrifice that causes Laurie immense pain, but one she ultimately feels is necessary for the safety and protection of the people she loves most. It would be easy to dismiss Strode in the same way that society dismisses doomsday preppers as "extreme," or "delusional," but Curtis' revisit to the role that made her famous is one of utmost respect and sincerity.

Strode isn't some basket-case who can't let go of the past, she's a survivor of a trauma so severe and otherworldly, it's impossible for her to escape it, because it refuses to let her go. Haddonfield doesn't want to accept the severity of what happened in 1978, and everyone else around Strode, including her daughter Karen (the always fabulous Judy Greer) and granddaughter Allyson (Andi Matichak) want her to get over it and get on with her life.

As Laurie has endured since The Babysitter Murders, Michael Myers, not unlike real serial killers, has become something of a mythological creature. Two journalists from the U.K. want to study him for a podcast they're hosting, one that is alluded to being similar to the first season of Serial. Their intrusion on both Michael Myers and Laurie Strode serves as the catalyst for chaos, offering just the right amount of push to bring Myers over the edge, and back on a warpath to Haddonfield.

Green and McBride present Halloween (2018) with just enough fan service to satisfy the naysayers and those upset that they've disrupted the canon of Michael Myers, but offer a new examination on the relationship of Michael and Laurie, ripe for a generation that is now analyzing the relationships between victims and assailants more than ever before. Laurie Strode's entire existence has been defined by Michael Myers and in turn, Myers' relationship with the surviving Strode has overshadowed any death he caused, forcing the two to be intrinsically linked.

As for the rest of the film, there's definite room for improvement. Some of the throwaway characters (especially one particularly insufferable kid in a devil costume) don't feel as realized as they could be, and there's a strange subplot with Myers' post-Dr. Loomis psychiatrist that felt unnecessary and forced. Luckily, the kills are totally brutal and the comic relief scattered throughout really lets the roots of Green and McBride's style shine.

Capturing the magic of John Carpenter and Debra Hill's original Halloween (1978) is impossible, and it's apparent that David Gordon Green and Danny McBride realized this, and instead wanted to expand upon the universe beloved for decades. Strode and Myers' inevitable face-off offers some of the film's most intense moments, and is as satisfying as any fan could hope it to be.

The heart of Halloween (2018) hits all of the right notes, and watching Curtis in action feels like an out-of-body experience. While Laurie Strode, the character, is often held to high regard as this ass-kicking final girl, it's frequently forgotten that Strode was just a teenager trying not to get killed. There was no planning, no outsmarting, just luck and determination.

Forty years later, Laurie Strode's not leaving anything up to chance, and has transformed into the legitimate un-fuck-withable final girl she was always meant to be.