All talk and little action, The Interpreter doesn't even make sense. 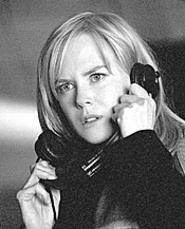 Kidman is a nice diversion for viewers wondering why the story makes no sense.
Among the many mysteries surrounding The Interpreter is the one that finds Sydney Pollack heralded as a major American director, a maker of Serious and Important Movies. His filmography, marked by mawkish mediocrities (Out of Africa, as vibrant as a coffee-table book; The Way We Were, its romance as plausible as sci-fi) and self-important bores (Havana, so awful, the audience staged a revolution; Bobby Deerfield, a race-car movie that goes 'round and 'round), certainly doesn't merit the huzzahs. Save for the giddy Tootsie, which has aged like a bottle of Boone's Farm, and the goofy Three Days of the Condor, Pollack's output suggests that he's but a pedestrian moviemaker, a small-screen guy who transitioned to the big screen 40 years ago and forgot to make the stories bigger. And it's best to forget his last two movies altogether: 1995's Sabrina remake and 1999's Random Hearts, rightly assessed by film historian David Thomson as "so awful their polish seemed absurd."

The Interpreter, starring Nicole Kidman as an African-born translator at the United Nations and Sean Penn as a Secret Service agent mourning the recent death of his estranged wife, would be nothing without that polish -- a shrug of a thriller, a tangle of inexplicable conspiracies upon which you could hang yourself out of sheer boredom. It's a movie about an assassination plot told almost entirely in flashback; everything that happens in the present -- which isn't much -- has to be explained again and again with old tales about past lives, not to explicate the onion-peeling layers of deceit common to political thrillers, but merely to reiterate the numbingly obvious. Which is to say, the whole movie makes sense until you begin to ask the simplest questions, and then it falls apart. Only Kidman, as the woman who overhears plans to kill a beloved African liberator-turned-murderous-dictator named Zuwanie (Earl Cameron), and Penn, as the skeptic sent to investigate her claim, keep us interested, emotionally attached to something so facile and hunh?-inducing that you'll wonder only much later how you got suckered into believing two plus two equals six.

Kidman, channeling Meryl Streep, plays Silvia Broome, a woman with a past that keeps revealing itself in Photoshopped pics that show up at the most inopportune moments. Though she claims hers are the politics of "peace and quiet," snapshots of a younger Silvia reveal that she was in fact once a gun-toting rebel, prone to attending the rallies of a hunky freedom fighter named Xola (Curtiss Cook), a former lover. Such revelations, which trickle out as the movie creeps toward its inevitable showdown, render her claims of overhearing those deadly whispers all the more dubious. She too has a vested interest in seeing Zuwanie, her old hero, popped in front of the U.N. General Assembly.

Tobin Keller (Penn), assigned to investigate, doesn't buy her story; Silvia strikes him as a woman with too many secrets to make much of what she says credible. "But it's a credible threat," he tells his higher-ups, who include Pollack himself, again making a cameo appearance in his own movie, à la Hitchcock, whose work this film tries hard to emulate without matching his dark humor. (Only Catherine Keener, as Penn's partner, bares her teeth in a shark's smile, as a Secret Service agent assigned to keep strippers' hands off visiting prime ministers.) And so Tobin and Silvia dance around each other, sharing secrets and war stories like lovers who know they'll never even get to kiss. It's their relationship -- strained and awkward, warming to tense and forlorn -- that keeps our interest, perhaps because the story that swirls around them, involving righteous rebels and dead families and busybody ghosts, never meshes into a coherent, affecting whole.

Pollack's working from a screenplay penned in part by Steve Zaillian (Gangs of New York, Schindler's List) and Scott Frank (Out of Sight, Get Shorty), with other writers credited as well, and the movie plays like a messy hodgepodge of moods, ideas, politics, and emotions. It centers on this one idea -- the assassination of Zuwanie, as he's coming to New York to explain that he's a good guy and not a dictator engaging in ethnic cleansing -- but never holds to that center, spinning off in too many directions that are meant to keep us guessing, but serve only to disorient us, to keep us from noticing how nothing makes a lick of sense.

During those moments when something tangible happens in the present, the movie can thrill and move us. The sight of a masked man on Silvia's fire escape delivers a proper jolt, and a scene aboard a Brooklyn bus, where a would-be assassin carrying more than his lunch bumps into Silvia and the feds and yet another of Zuwanie's enemies, is at once wrenching and comic, Hitchcock by way of the Three Stooges. But The Interpreter dashes the suspense by talking the audience to death. The action gives way, time and time again, to the inaction of people sitting there, explaining why they're there and how they got there and why they're not leaving, which isn't thrilling at all.