Martin Scorsese and the Rolling Stones, together again in Shine a Light 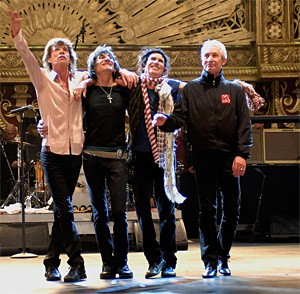 A long way from Altamont: The Rolling Stones as presidential accessories.

Shine a Light, Martin Scorsese's Rolling Stones concert film, is not only a vanity project for everyone involved; it's a total tongue bath. The backstory: Scorsese has used Stones anthems in countless movies (Mean Streets, Goodfellas, Casino, The Departed), so the World's Greatest Rock 'n' Roll Band asked the Very Excellent Film Director whether he'd like to film the Highest-Grossing Tour of All Time.

He happily obliged, and all parties settled on documenting the second of two 2006 Stones-headlined charity benefits celebrating Bill Clinton's 60th birthday at Broadway's Beacon Theatre, a gilded vaudeville hall with a capacity of 2,800.

In Stones proportions, this is tantamount to a basement show, so Shine a Light comes packaged with the pretense of "intimacy." What the cozy circumstances do provide is icon interaction: Hillary Clinton politely making the Stones wait for her tardy mother; Keith Richards whispering about how he should walk up to Bill and say, "Hey, Clinton. I'm Bushed!" Meanwhile, a frantic Scorsese irons out last-minute logistics, admonishing one crew member over a lighting setup that could potentially set Mick on fire. These are Shine a Light's first and best 15 minutes.

The remaining 100 or so consist of a fairly decent, inoffensive, mostly unsurprising Stones concert. If Altamont was the Boston Massacre of rock shows, this is a presidential-library dedication. In San Francisco, Hells Angels, flabby nudes, and tripping hippies lined the stage. In Manhattan nearly 40 years later, the front row is full of expensive watches, gym members, and raised camera-phones.

So invariably they get the hits, Keith singing like a hound dog in heat for "Connection," and Jack White looking genuinely humbled to join Jagger for a superb rendition of "Loving Cup." Special guest Buddy Guy is dapper, fitting, and possibly stoned. Token female Christina Aguilera is actually pretty good.

Scorsese does splice the 90-minute performance with some hilarious archival footage. Mostly, though, the excavated interviews are devices for groaningly trite foreshadowing. Gee whillikers, Mick, can you see yourself doing this at 60? Mick: Yes, I can.

And so Shine a Light's only point seems to be: You try this at 60. But one would hope that, after The Last Waltz and No Direction Home, Scorsese might venture beyond making a glossy episode of Ripley's Believe It or Not.