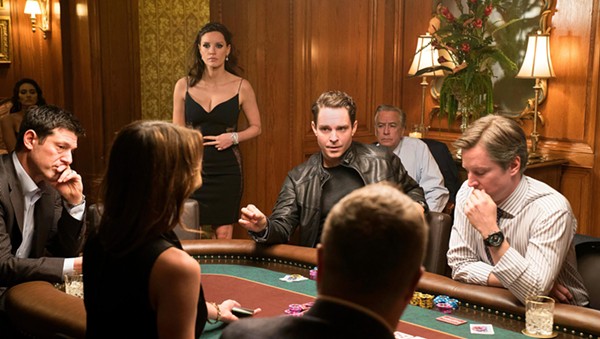 Based upon Molly Bloom’s memoir Molly's Game: From Hollywood's Elite to Wall Street's Billionaire Boys Club, My High-Stakes Adventure in the World of Underground Poker, the movie features a naturally compelling story about Molly (Jessica Chastain), a former Olympic-caliber skier who rather innocently becomes the linchpin for a high stakes poker game that attracts celebrities, businessmen and members of the Russian mob.

Sorkin tells Molly’s story through a series of flashbacks. At the film’s start, the FBI arrests her on a number of charges relating to illegal gambling and money laundering, seizing millions of dollars from her bank account and forcing her to scramble to find a lawyer in time for her arraignment.

Flashback to Molly’s childhood, and we learn that her father worked as her ski instructor and taught her so well that she could have probably won an Olympic medal if it weren’t for a nasty spill that dashed those hopes and dreams. She might not have made it to the Olympics, but Molly remains on the fast track for a successful career. An academic overachiever, she plans to go to college but takes a year off to enjoy the childhood she never had. She crashes at a friend’s place in L.A. and gets a secretarial job for verbally abusive real estate agent Dean Keith (Jeremy Strong).

As Dean’s assistant, she organizes a big-money poker game once a week. After she begins raking in the big tips the players toss her way at the night’s end, she decides to cut Dean out of the equation and successfully begins putting the games together herself. She doesn’t gamble, and she doesn’t sleep with any of the players (though most of them make it clear they’d like to get in her pants). But she does develop a drug habit that hampers her ability to make good decisions, so when Douglas Downey (Chris O’Dowd), a regular, suggests she let a few Russian mobsters sit at her poker table, she agrees, even though it’s against her better judgement.

Things go south quickly, and it’s not long before the FBI catches up with her, and she’s looking at criminal charges.

Molly lawyers up, recruiting Charlie Jaffey (Idris Elba) to defend her in court. The scenes with Chastain and Elba are electric as the two seasoned actors bring Sorkin’s wordy, overly articulate script to life and overcome some rather pedestrian directing. Chastain and Elba overshadow actors such as Michael Cera, who seems miscast as a celebrity poker player, and Kevin Costner, who tries too hard as Molly’s stern father.