Last Days follows the final spiral of a tormented musician. 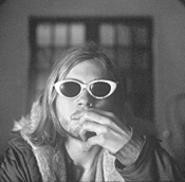 Virtually nothing happens, and you still can't look away.
Once you get past its negligible plot, scant dialogue, and almost zero action, Gus Van Sant's elliptical rendering of the final hours in the troubled life of a grunge musician is rarely boring. That may seem like a backhanded compliment, but, in light of the absence of such customary cinematic conventions as story line and character development, Last Days shouldn't be half as engrossing as it turns out to be.

More observation than character study, the film doesn't even try to get into the head of its existentially angst-ridden protagonist. Most viewers will enter the theater fully aware that the film is based on -- Van Sant prefers "inspired by" -- the death of Nirvana frontman Kurt Cobain, who committed suicide in 1994 at the age of 27. It's the final entrée in Van Sant's trilogy of movies based on newspaper stories -- the first two being Gerry, about two friends who get lost while hiking in the desert, and Elephant, about a Columbine-like school shooting. As with Last Days, neither of those films examines the whys of the situations they present, and Elephant is the only one of the three that really reaches out emotionally.

Here, we see Blake (The Dreamers' Michael Pitt), the melancholy, drug-addicted recluse at the story's center, as he wanders through what seems like an unremarkable day. He walks in the woods outside his dilapidated, sparsely furnished country mansion, cooks macaroni and cheese, writes music, avoids erstwhile friends, ignores the ringing telephone, and patiently listens to a door-to-door salesman hoping to sell advertising space in the new phone book. We're not asked to identify with Blake; we merely observe him. His inner turmoil and the reasons for it can only be presumed, for he never articulates his feelings and his face never betrays any emotion. A clump of blond hair obscures his eyes; he can peek out, but no one can see in. He is usually glimpsed in wide shots anyway or from the back. Or with only his torso, arms, and legs exposed.

Giving what may be his best performance to date, Pitt has dropped the annoying posturing that marred so many of his earlier roles. His characterization here is based almost entirely on his physical presence: slouched posture; rambling, sometimes lurching gait; and movements that seem at once kinetic and in slow motion. They suggest a man who is both distracted and intensely focused.

The cinematography, by Harris Savides (who also shot Elephant), maintains an emotional distance; the camera remains in one spot -- locked in some unremarkable, static wide shot or accompanied by a slow dolly move that proves equally all-inclusive. We are peering at a scene, but we are never in it.

The characters that revolve around him -- mainly his hanger-on friends, played by Lukas Haas, Asia Argento, Nicole Vicius, and Scott Green -- make an impression only to the extent that they seem to be using him without offering anything in return. Certainly, they are part of his problem.

Though Last Days never tries to get inside Blake's head or to understand his confusion or unhappiness, it encourages us to psychoanalyze him from afar. It's not so much emotionally cold as it is achingly neutral. It doesn't answer any questions or dispel any mysteries, but somehow, it compels you to watch. Might even stick with you for a while.