Against all odds -- and several plot implausibilities -- director William Friedkin stages a comeback.

Send a News Tip
The Hunted 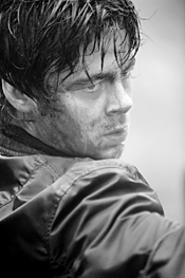 The Hunted pits Tommy Lee Jones versus Benicio Del Toro in a battle of hand-to-hand, wit-to-wit fighting skills. Frankly, my money would be on Tommy Lee any day: He may be old, but he's a tough geezer who looks like he could mop the floor with Benicio. (Also, frankly: No one else at the screening agreed with me.)

The film also pits once-mighty director William Friedkin against 15 years or more of a declining career. As such, it is likely to keep him afloat until the next feature . . . but just barely.

The Hunted opens wonderfully for about 30 seconds, as we hear Johnny Cash reciting some lyrics from Bob Dylan's "Highway 61 Revisited" over a black background, and then continues badly with a six-minute introductory sequence of sheer chaos. It's 1999 in Kosovo. Soldiers are machine-gunning entire families while the city burns. In the midst of this, Aaron Hallam (Del Toro), an American soldier, is sneaking through the rubble.

Except that Del Toro's camouflage makeup is so thick that we can't really recognize him, so what comes across is six minutes of utter confusion without a character we can identify or latch on to.

Leap ahead to 2003: Hallam is now pretty much a full-blown psycho. He has apparently become the world's most militant vegetarian, stalking the woods to kill hunters before they can shoot Bambi's mother. Not even the radical wing of PETA has gone that far. (Also, he inexplicably seems to have a hidden PA system or "Mr. Mike" device in the middle of the forest. See "irritating plot implausibilities" below.)

L.T. Bonham (Jones) is called in by the authorities -- though exactly which authorities isn't clear, which is a problem, since jurisdictional disputes later become a plot point. It's not just that L.T. is the world's greatest woodland tracker; it's also that he trained Aaron in survival skills and combat for the Army and he was a father figure to him. Of course, the authorities don't know who the killer is at this point, which makes the whole thing one hell of a coincidence.

L.T. finds Aaron in no time and brings him in with the help of an FBI agent (Connie Nielsen), who just happens, by the luck of the draw, to be young and beautiful. But that's just Act One, so you know that something has to go wrong.

It does. And the rest of the film is pretty much one nonstop chase/fight.

It's not surprising to find a big chase here. In 1971, After four commercial flops, Friedkin became famous with The French Connection, whose chase sequence is still the textbook on the subject. Allegedly, Howard Hawks, whose daughter Friedkin was dating, had told him after his fourth film something like "People don't want stories about somebody's problems or any of that psychological shit. What they want is action stories. Every time I made a film like that, with a lotta good guys against bad guys, it had a lotta success, if that matters to you . . . A chase would be nice. People like chases."

The French Connection made money and won a bunch of Oscars, including Best Picture and Best Director. That Friedkin's next film was The Exorcist didn't hurt, either.

It was a brief stay at the top. Thirty years of subsequent films have done much less well commercially and generally less well critically. His last fully first-rate feature was 1985's To Live and Die in L.A., and even for that one you have to ignore the utterly awful final 10 minutes. (The Guardian would be his nadir.)

The Hunted is rife with irritating plot implausibilities, particularly given the gritty, realistic tone it employs. Sure, Friedkin is kind enough to show us exactly how Hallam manages to craft an effective weapon out of nothing, but he neglects to show us how he rigs a booby trap involving two huge logs suspended from trees -- this is all within a few hours -- or, more to the point, why he would do something so flashy and presumably labor-intensive, while on the run.

On the plus side, there is one really ace fight early on, one jump-from-your-seat shock in the middle, and a couple of spectacular stunts. It also avoids several obvious clichés. Friedkin goes out of his way to present some obvious plot setups, and then, to our great gratitude, doesn't follow through with the groaningly predictable payoffs.

Jones's age does show, however. He seems to have trouble keeping up with the large amount of action he's required to participate in. And Del Toro seems ill-cast and ill-used. His part is so lightweight that it could have been played as effectively by Ben Affleck.