Time Out of Mind

The epic sweep of Timeline is easily forgotten. 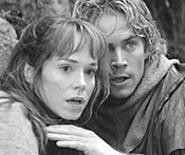 Frances O'Connor and Paul Walker ride a massive vegetable steamer to 14th-century France.
Michael Crichton seems pretty clever. The doctor-screenwriter-novelist digs odd history (Eaters of the Dead, aka The 13th Warrior), clashing cultures (Rising Sun), and cutting-edge biotechnology (Jurassic Park, and virtually his whole canon). His 1999 novel and its inevitable new movie adaptation, Timeline, both attempt to deliver all this and more, wrapped in a rollicking time-travel adventure story stretching back to 14th-century France. The book is engaging, even crackling when its characters bubble over with amusing insights or the author gets a stiffy for creative anachronism. At its best, however, the movie looks like it was sort of fun to make.

Perhaps we should be grateful that Crichton and director Richard Donner (the Lethal Weapon franchise) shoveled paths through their deep drifts of money in order to come share their creative gifts with us. In theory, this is a solid pairing. However, between these two and novice co-screenwriters Jeff Maguire and George Nolfi, something went wrong with Timeline. The thriller's setup is jeer-at-the-screen funny, featuring egregious quasi-scientific exclamations ("A wormhole is one of the most volatile forces in the universe!") that would embarrass the hell out of Doctor Who. Thereafter, there's a lengthy middle stretch involving aggressive Ren Faire types killing and being killed. The thing finally climaxes with a lumbering nighttime siege sequence suffering from obvious Helm's Deep envy. The overall response lies somewhere between mumbled mockery and mildly amused indifference. If you're seeking medieval time travel, skip this and rent Time Bandits, and at least you'll know you're supposed to be laughing.

After cramming the book's first 37 pages into a two-minute howler of forced technical exposition, this movie hastily chucks us into southern France (aka Quebec), where Scottish archaeology professor Edward Johnston (Billy Connolly) leads the excavation of a small medieval village. For rather silly reasons, he abruptly visits the top-secret New Mexico laboratory of dig-sponsor and übercapitalist Robert Doniger (David Thewlis), then somehow gets trapped back in the French village -- circa 1357, on the brink of a major battle between the English and French.

Rather alarming this. His confused son Chris (Paul Walker), spunky archaeologist Kate (Frances O'Connor), soulful medievalist Marek (Gerard Butler), and Donald Sutherland's son Rossif agree to venture back in time with some uppity marines to locate and rescue their scholarly patriarch -- via a time-travel contraption that looks like a massive vegetable steamer with vanity mirrors.

Frankly, the stunning effect inside the time machine resembles demonic flatulence aimed directly at the face, which could explain why our heroes seem a little out of it, once they land in the Middle Ages. Clad in peasant duds conveniently provided by Doniger, they awkwardly try to fit in. They fail, especially in their conflict with the English Lord Oliver (Michael Sheen), whose medieval, European teeth are so outrageously white that he must have swiped a tube of Rembrandt from the French during one of his raids. Meanwhile, handy Marek woos Gallic lass Claire (Anna Friel), whose regal brother happens to be the Merovingian himself, Lambert Wilson. Marton Csokas of The Lord of the Rings also shows up as a total jerk, but explaining his presence would give away most of the remaining vestiges of Crichton's tight little plot.

There's a modicum of charm to Timeline, since its eager, earnest tone harks back to Donner's work from the '80s, particularly The Goonies and Ladyhawke. It starts off looking awkward and cheap, but the epic money shots keep building. It also features beefed-up Butler (Dracula 2000) pretending he's Wolverine with his shirt off, which may sell a few tickets to the sensually deprived. The flaming trebuchets are also pretty cool. And it can be said with confidence that, among major movie studios offering competing epic action fare these days, Paramount has the loudest arrows.

Other than that, it's all pretty screwed up from the top down. Playing our primary hero, here rendered bereft of character, Walker (of the Fast, Furious franchise) displays all the charisma of a laundry basket. Someone please have a word with producer Lauren Shuler Donner, who is also bringing us Keanu Reeves as John Constantine of the Hellblazer comic -- which is just plain wrong. Must Hollywood crap on everything potentially good?

With Timeline's tone constantly dancing on the edge of self-parody, the other leads don't fare much better. And what comes across as slightly implausible in the book arrives as just plain stupid here, as when an archaeologist, desperate to escape a crumbling subterranean chamber, happens to glance around and discover some vital clues. In the dark. Buried under rocks. Silly. The oppressive score throughout the film by Brian Tyler (Bubba Ho-Tep) grows ever more bludgeoning, but in no way conceals this project's self-involved collapse into goofiness. Which is too bad, because the concept is pretty nifty.