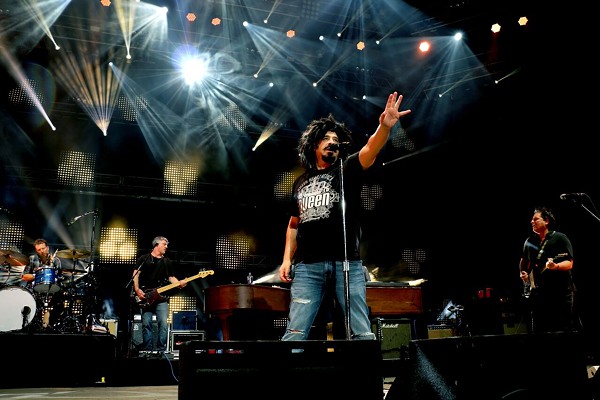 Ehud Lazin
An avid Golden State Warriors’ fan, Counting Crows singer Adam Duritz witnessed the team’s one loss in last year’s playoffs, but he didn’t mind watching the Cavs dismantle the eventual champs. He says he thoroughly enjoyed the atmosphere at the Q during Game 4 as the Cavs pounded the Warriors, winning by more than 20 points.

“It was so awesome even though we got the shit kicked out of us,” he says during a recent phone interview from his New York home. Counting Crows and Matchbox Twenty perform at 6:45 p.m. on Wednesday, Sept. 20, at Blossom. “The fans were great. I had more fun at that game than any other game. It was cool to go to a place where fans are like that. I had the best time. It was like riding a roller coaster. It was totally thrilling.”

Originally, Duritz kicked around in a few different bands in the San Francisco Bay Area before Counting Crows came together and issued its impressive 1993 debut, August and Everything After. He had been in the rock act Himalayans, and that group would eventually evolve into the Crows and turn the Himalayans' song "Around Here," a single on August and Everything After, into a huge hit.

“I was intensely proud of [August and Everything After],” Duritz says. “I didn’t know if people would like it or listen to it or ever really hear it. Those are two different things. It’s impossible to tell. I thought we were making a fantastic record, but I’ve thought about every record. I’ve loved them all really. The truth is that there’s no way to tell if people will hear it. I always thought our records were great, but it hasn’t been that experience where everyone likes what you do. Before that first record, I had spent ten years in the club, and no one had heard my music. It was beyond my imagination at that point.”

In the early ’90s, bands in San Francisco benefited from the fact that they could use empty warehouses to rehearse and record. Members of the Crows even lived in a warehouse for a time.

“There was this two-month period where we went out every single night, and we either played a gig or rehearsed or saw our friends play a gig every single night,” Duritz recalls. “There were so many people playing in so many great bands. We were all in those bands. [Keyboardist] Charlie [Gillingham], who I didn’t know that well then, was in like 12 bands. There were always warehouses where bands rehearsed or where recording studios were. They all got turned into condos, and after a while, there was no place to rehearse. The music scene died out, and the clubs became other things as well. Some friends I know who still live there say it’s hard to find a place to rehearse.”

Duritz famously struggled to cope with the band’s sudden popularity. He admits it was difficult for him to adjust to seeing his mug shot in the tabloids on a regular basis.

“I think I was naturally shy and dealing with some mental illness problems,” he says. “For me, it was probably more difficult than it would have been for other people. I probably would have been fun for somebody else. The thing I figured out early on is that there’s the thing you’re doing, which is playing music and performing at shows. There’s also the thing that has to do with being famous. That’s a separate thing. It’s not something you’re doing. It’s what other people are doing to you. It’s very extraneous. It doesn’t have anything to do with your creativity. You just have to decide how to approach it. It’s not going to help you make a record. For me, I was not comfortable with it.”

He says writing and recording the songs from the band’s most recent album, 2014’s Somewhere Under Wonderland, was “very difficult and challenging and wonderful.” Extensive rehearsals helped the recording process.

“It’s probably one of the fastest albums we’ve made,” he says. “It went really well, but part of that had to do with the fact that I was woodshedding for a week every month in my house. We were there together. When we demoed the songs, we just held up an iPhone to record ourselves. When we got to the studio, it wasn’t just me teaching six other guys to play a song. They had the demos, and we had four guys pretty versed in the songs. That made it easier on everyone else.”

The album opens with the cinematic “Palisades Park,” a song that has a Randy Newman-like feel with its rolling piano melody and soft vocals. Mid-tempo rock tunes such as the plodding "Scarecrow" and the punchy “Dislocation” retain the band’s Van Morrison-like impulses while embracing a free-wheeling and spirited approach.

“To me, it’s my favorite record we’ve ever made and has my best songs on it,” he says. “I’m really in love with ‘Palisades Park.’ I probably say that about every record. It was a very satisfying record to make. I liked everything about that record, including the touring, I was happy about. I wanted to make a huge cultural splash, and that didn't happen, but it’s hard to do that.”

For the live shows, Duritz will often rearrange the tunes to the point that they hardly resemble their studio counterparts. He says he does it to capture a moment.

“I don’t feel like the songs have to be played the same way every time, or they have to be set in stone,” he says when asked about his approach. “If you listen carefully, you’ll hear your band mates playing differently, and it’s okay to be inspired by that and do something different yourself. I think it’s important to see the songs as living things and to allow the events of the day to influence the songs. People get worried about playing things right, and that turns into playing things the same. I don’t feel any pressure to do that.”

He explains that “Mr. Jones,” for example, is a song about “dreaming about being famous” and how difficult it can be to attain fame. When he wrote the tune, he had yet to achieve any sort of recognition. Now, 20-plus years on, he doesn’t identify as much with the track’s original concept.

“The way I felt about that song when none of that had happened to me is different now that all of this shit has happened,” he says. “I’m experiencing it differently. It makes the song better, and it makes it into something I’m experiencing right now.”

Duritz, who had yet to embark on the summer tour with Matchbox Twenty at the time of this interview, says he’s particularly excited to hit the road once more with the alt-rockers who came on the scene at about the same time as Counting Crows.

“I really am excited about the tour even if just because [singer] Rob [Thomas] is one of my favorite people in the world, and we were dying to spend more time together after last year’s tour,” he says. “It just feels kind of great.”