Aly & AJ, Who Play House of Blues on Thursday, Talk About the New Chapter in Their Career 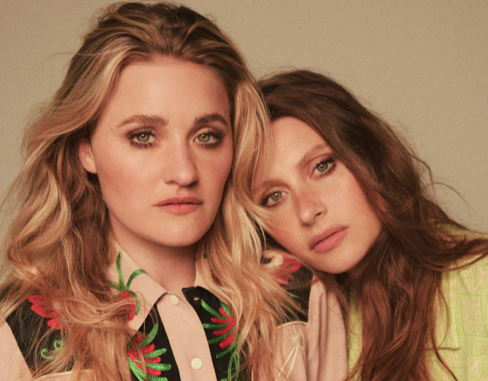 Shervin Lainez
Aly & AJ.
Aly Michalka, half of the indie pop sister duo Aly & AJ, says that music always played in the duo’s home when they were growing up.

“We just really gravitated towards it,” she says in a recent conference call with AJ Michalka. “Whether it was us picking up the piano or starting vocal lessons at young ages, and then getting into guitar as young teens, it was very much a part of our lives. Even when we were in the womb, my mom said that she played a lot of music for us.”

Aly & AJ are touring in support of last year’s independently released album, a touch of the beat gets you up on your feet gets you out and then into the sun.

“Being back on tour is big for us,” says AJ Michalka. “I’m excited to go back to Cleveland — 'cause we haven’t been there in a bit— and put on a great show.”

Aly & AJ got their start in the music business when they signed a deal with Hollywood Records in 2004. Disney Channel aired the duo’s music videos constantly, and they built a devoted following. After taking ten years away from music to focus on their acting careers, the sisters traded their teen angst for a softer indie sound when they broke back onto the scene in 2017.

“We just felt like we were missing out on something that we were naturally really good at,” says AJ Michalka. “We have something really powerful that’s something that we only do together, and we’re kind of selling ourselves short if we don’t revisit this career that we had at such a young age. There’s a place and time to kind of reclaim it, and it took us a while to find that time. Once we did, it was like a no-brainer.”

The duo continued songwriting during their lengthy break from releasing music, and their musical chemistry only intensified when they were working on a joint movie, 2015’s Weepah Way for Now.

“That really inspired us to get back to music, because there was a musical aspect to our characters in the film, and we sang an original song in it,” says Aly Michalka. “And funny enough, the crew when we were filming it were like, ‘You guys are so great. Why aren’t you guys making music?’  And we were like, ‘We’ve been writing. We’ve been kind of keeping these songs to our chest and not sharing them with anybody.’ And I think that really helped us to kind of re-integrate ourselves back into the music space again.”

Aly & AJ have worked hard to balance honoring their old music, while still giving their new work its time to shine.

“We knew that we didn’t want to alienate fans, but we also knew that we weren’t putting out the same exact style of music that we had, you know, ten-plus years ago,” says AJ Michalka. “So, it was kind of trying to meet in the middle somewhere, where we were able to excite the fans that were still there, and were, you know, thrilled that we were bringing new music to the table, but we also wanted to put out new music that also served our own selves as well. And at certain times, I think that it was easier to do than others.”

When an opportunity arose to re-connect to their roots, the duo didn’t let it slip away. In 2020, Aly & AJ released an explicit, re-recorded version of 2007’s smash-hit “Potential Breakup Song” after the track blew up on TikTok.

“That was almost like a happy accident,” says AJ. “It gave us a reason to wink back at the past, without us initiating that originally.”

The pair have worked hard to curate a setlist that will please themselves and their fans.

“There’s no like wrong or right way to distinguish between your old creative or your new; you just have to keep putting out great music,” says Aly.

On this tour, Aly & AJ are playing some old favorites like “Potential Breakup Song" along with most of the tracks on a touch of the beat gets you up on your feet gets you out and then into the sun, and they could not be more excited.

“We open the show with [‘Pretty Places’] and it just goes off so well with the crowd,” says AJ Michalka. “I think it’s just such a good starting tone to the album. It starts the record; it starts the live show — it just feels really good and really right. I think that that song is the kind of benchmark of the album. It’s like that one represents: this is the sound, this is the kind of the…”.

“...Journey that we’re gonna take you on,” finishes Aly Michalka.

The dreamy, melodic track transports listeners into the new musical world that the sisters have built. In this new chapter of their careers, Aly & AJ are finding joy in crafting deeply personal new music that covers topics such as anxiety and reaching heights that they never did the first time around. The duo named playing the main stage at their first-ever festival [last year’s Lollapalooza] and making their late-night debut on Jimmy Kimmel Live! earlier this year as career highlights.

“I think growing up, and moving, and Aly getting married, and us becoming adults and getting into our thirties, and understanding what life is like as an actor — which has also kind of been intense and its own struggle — has only really added to our creativity and what we can write about,” says AJ Michalka. “And I just feel like every year is a new growing period for our music.”

The California natives are glad to be doing things their way this time around.

“I think that’s the whole upside to being an independent artist is that you get creative freedom to release the songs you want to release, and in the order you want them in,” says AJ Michalka.

Aly & AJ have carefully planned out each of their releases over the past five years.

“You can make choices that don’t feel as obvious as maybe a label’s choice would be,” says Aly Michalka.

The sisters decided to release “Slow Dancing,” a stripped-down love song, as the lead single on a touch of the beat gets you up on your feet gets you out and then into the sun.

“We’re not doing anything to be left of center on purpose,” says AJ Michalka. “We just felt really strongly that that was a song that would resonate with our fans for this cycle, and it worked.”

When Aly & AJ re-ignited their music career, the connection with fans was a big priority.

“I think that’s kind of our overarching message with our music —  that people will listen to it and feel accepted and embraced,” says Aly Michalka.

“And that they can maybe heal from any kind of trauma or sadness that they’re going through in their life. Or maybe come to a conclusion on something that they have been feeling unsure about, or just have a new outlook,” she says. “I think that would be something that we would love to have every fan walk away with.”