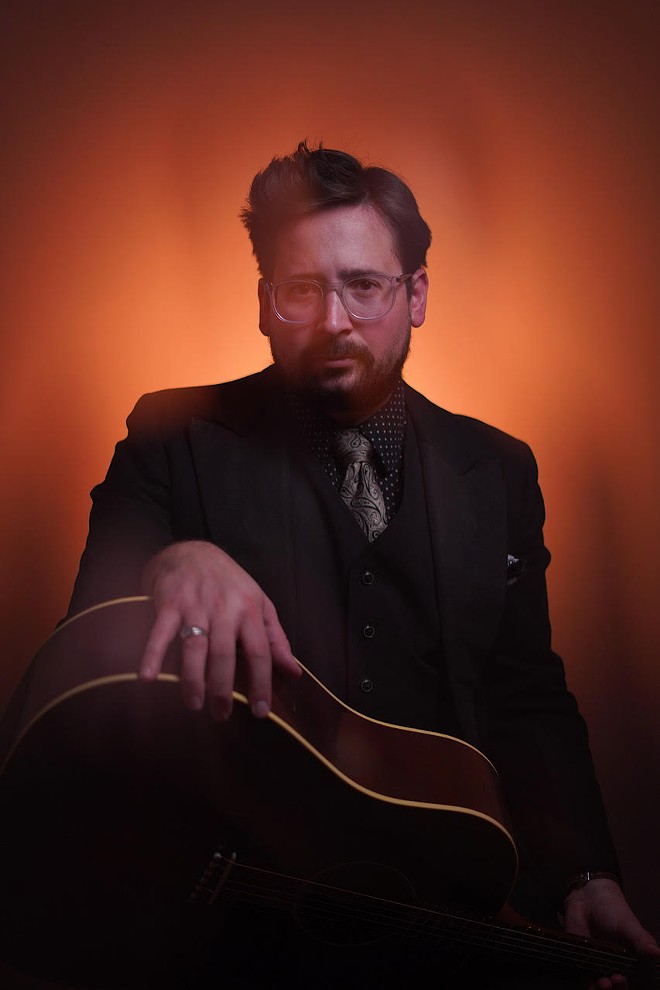 Pequignot, who grew up in Richmond Heights before moving to Macedonia at age 15 got hooked on songwriting after his parents bought him an 8-track digital recorder. “I had been writing songs for a couple of years at that point, but after I got that recorder, I started getting into recording,” he says one afternoon from Dark Current Productions, the studio where he rehearses and records with the local indie band Terrycloth Mother. “My favorite bands at that time were Barenaked Ladies, which got me into wanting to be a songwriter, and They Might Be Giants, who made me want to do self-recording. I was 17 visiting my sister in Los Angeles, and I went with her boyfriend to see this documentary about Wilco and [2001’s] Yankee Hotel Foxtrot. That opened my whole musical world up.”

While he was still in high school, he released his first album, Rockefeller. “It was terrible,” Pequignot says. “I listened to a bit of it not that long ago and had to turn it off.” Undeterred by that first attempt, he went on to release four solo albums between the ages of 15 and 25. “I’ll still put on the last one occasionally,” he says. Over the past 15 or so years, Pequignot has also played in local indie acts such as Emmet and the Singular.

The songs for his new album, Memento Mori, first began to take shape in 2017. “I was going through a lot at the time — my dad died, and I got divorced and married again,” he says. “That’s all kind of in there. It was a creatively prosperous time.” He recorded most of the album at home. “I was doing stuff in the basement and would record a straightforward version of the song and then replace instruments with other things,” he says. “It ended up in some cool places.”    WHY YOU SHOULD HEAR HIM: Album opener “Serious Moonlight” features brittle guitars as Pequignot sings softly on it, referencing the late David Bowie. Jittery synths distinguish “Cartoon Without a Caption,” and the sparse piano ballad “Is This Loss,” a song that’s loosely about his father’s death, puts Pequignot’s quivering vocals up front in the mix. Pequignot drew upon Hamlet and Rosencrantz and Guildenstern Are Dead for “Tony Stark and Iron Man Are Dead (Schrödinger’s Dad).” My wife and I watched the Kenneth Branagh version of Hamlet and the Rosencrantz and Guildenstern film,” he says. “That was very much in our minds. It’s about seeing Tony Stark’s death face in Avengers and being affected by it emotionally. I realized it was syllabically the same. It’s a nod to all that.” The album closes with the somber “Burying the Dead.”  “I did lean into the death stuff because it was on my mind,” says Pequignot when asked about that track. “I didn’t know where else to put that song. It’s the heaviest song. It’s unapologetically heavy.” Pequignot says a new album is already in the works. “I have a piece of work that has been in progress since 2007 called Baby Teeth, which is all piano compositions,” he says. “I have recordings of things in different states, and I’ve got a ton of other acoustic songs too. It’s been nice to feel some forward momentum with songwriting. This piece of work feels behind my current songwriting oeuvre, but all in due time.”

WHERE YOU CAN HEAR HIM:

WHERE YOU CAN SEE HIM:

James Pequignot performs with Gretchen Pleuss and Rob Kovacs at 7 p.m. on Saturday, June 11, at the Happy Dog.