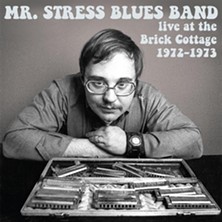 Smog Veil Records, the label devoted to reissuing albums by some of Cleveland’s best bands, has just announced that a record release party for Mr. Stress Blues Band: Live At The Brick Cottage 1972 – 1973, the next release in Smog Veil’s Platters du Cuyahoga series, will take place on Friday, June 3, at the Beachland Ballroom. The record, which features extensive liner notes streets, will be available in digital format as well as CD and vinyl on May 13.

"With the release of Smog Veil’s Mr. Stress Blues Band 1972-73 retrospective, we are honored that many of the musicians who played with the band at that time and throughout the band’s storied history are taking the time to do what Bill aka Mr. Stress enjoyed most: taking the stage, making people dance and smile, and giving to the community he lived his whole life in: Cleveland, Ohio," says label founder Frank Mauceri in a press release.

The album includes a collection of recordings taped live at the Brick Cottage in Cleveland in 1972 and 1973.

Alumni from the Mr. Blues Band will join locals such as Blue Lunch, Anthony Lovano's Supernatural Band featuring Tim Matson, and the Alan Greene Band. Tickets are $10, and the show starts at 8 p.m.