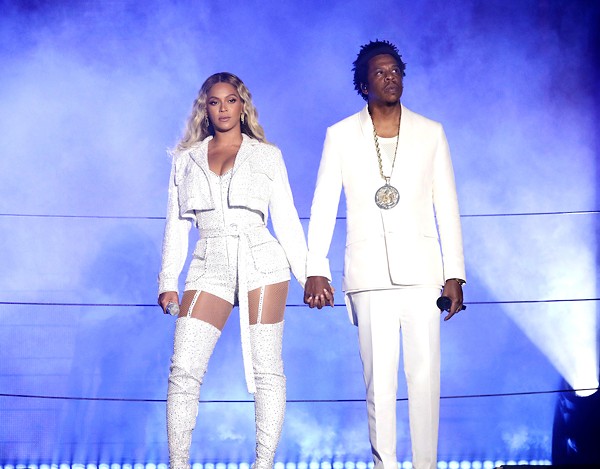 Photo by Raven Varona/Parkwood/PictureGroup)
Beyoncé Knowles-Carter and Shaun "Jay-Z" Carter need you to know they are still crazy in love. They want you to know that they have moved on from their tabloid fodder years, that they have fought for their marriage and that they are stronger. But they couldn't just prove this to themselves; they had to prove it to the rest of the world by heading out on a giant spectacle of a tour together.

Hammering home the point, the two arrived at FirstEnergy Stadium last night on a descending platform while wearing gleaming white and holding hands. There were no dancers yet to fill the expansive, two-runway stage — there was only the two of them and the shadows of the band behind. Through the cheers and screams, they rolled into Jay-Z's hit with Justin Timberlake, "Holy Grail," stomping and gliding around the stage. This was quickly continued by "Part II (On the Run)" and "'03 Bonnie & Clyde," a song written back when the couple was still only dating.

The night was a seamless and smartly-designed production involving video, a huge band, a treasure trove of insanely talented dancers and the couple moving between decades of their own music, performing near-perfectly together and apart.

The power couple actually kicked off the On the Run II American leg here last night, and Jay-Z was very aware of what city he was in, peppering its name into many of his raps and between songs. His work on "Big Pimpin'" was nothing short of masterful in making the arena go crazy. "99 Problems" also got the stadium shaking.

With "Flawless," Bey made all the women in the lakefront stadium scream along to the lyrics "I woke up like this." Of course, rest assured, that from the barely dressed to the insanely stylish, no one in that stadium woke up looking that good in the morning. (Beyonce's ever-changing sparkle wardrobe was on point as always, but the packed-in audience brought its A-game as well.) At one point in the song, her mic started glitching out. But ever the entertainer, Queen B kept going, dancing and moving to the side of the stage to snag a new microphone from a sound tech.

There was clearly no lip syncing in this show. Beyonce's impeccable vocals may have sounded pretty much flawless, and Jay's rhymes were shot off with perfect abandon, but it was most certainly real.

There was one section of the show during which attentions did wane ever so slightly, with people sitting and relaxing during two slower solos. Shockingly, phones were even put down for a bit here.

A word about the film interspersed between the sets' wardrobe changes: It was basically, once again, Bey and Jay controlling their narrative. They showed their babies and their island vacations. They showed fights, running through fields, making up, and artfully reaffirming their love and getting remarried. As Jay recently pointed out to David Letterman in a Netflix interview, more than 50 percent of marriages in this country fail. His wasn't going to be one of them.

The finale of the show came with Bey and Jay singing "Young Forever" on a raised platform moving majestically into the middle of the stadium. But as a special encore, without them actually leaving the stage, they went into the brand new single off their recently released joint album, Everything is Love. To say the least, the crowd went "Apeshit."

From "Drunk in Love" to "Crazy in Love," we heard nearly 40 songs from the pair of them, and the concert lasted more than two and a half hours. You know a show is huge when there are actual credits at the end rolling on screen. At the end, they waved, said goodbye and left us to fight our way out of the packed-in building.

"This is real love," the screen proclaimed in the end. And for those few hours on Wednesday night, they made us believe.
click to enlarge 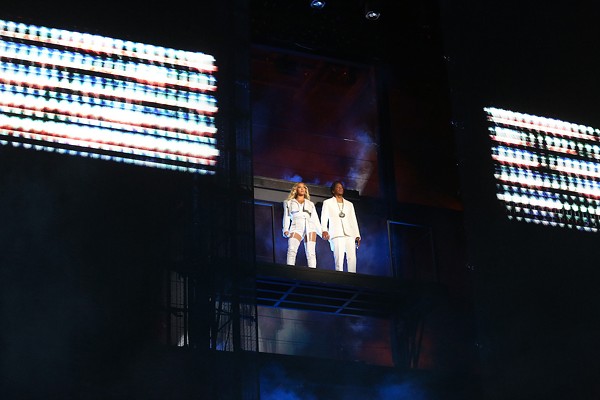