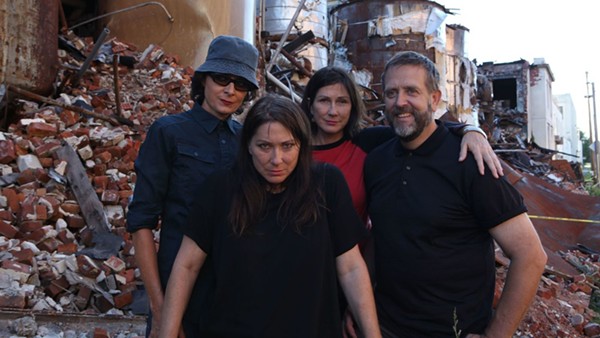 Courtesy of 4 A.D. Records
In 2012, the Breeders reunited for the 20th anniversary of Last Splash. Thanks to the lurching single “Cannonball,” that album launched the Dayton indie rock band’s career in the '90s.

The reunion tour gave the group a serious second wind.

“It jumpstarted the band,” says guitarist Kelley Deal via phone from a Clearwater tour stop. The group performs at 8 p.m. on Thursday, Nov. 1, at the Masonic Auditorium. “Nobody in a million years thought that when I was on the couch, and Kim and I were talking that we would do that tour and do another record. Nobody thought that ever. We really got along well on that tour. We enjoyed playing music with each other, and so we started adding more songs to the set.”

The anniversary tour just kept going and even extended into 2014, and at that point, Deal says she knew the band had turned the corner.

“We were planning for shows in 2014. That meant it was no longer the Last Splash anniversary,” she says. “Does that mean we should do different songs? We thought about doing a new song that was from [singer-guitarist Kim [Deal's] solo career, so we learned that. It was really crazy.”

After a Hollywood Bowl gig that same year with Neutral Milk Hotel and Daniel Johnston, the band played a few more dates and stopped by Steve Albini’s studio in Chicago to work on the three or four new songs that had made their way into the live sets.

“We did some rhythm tracks for two songs and then recorded a lot more of [what would become last year’s All Nerve] at [producer] Mike Montgomery’s place in Dayton, KY.

“They were traveling through Ohio and had a day off,” says Deal when asked about working with Barnett. “Kim knew her from doing this interview where they had interviewed each other. When they were going through Ohio, they texted Kim to see if she wanted to get coffee. Kim was in the studio and told them to come by and check the place out. Mike Montgomery put up a bunch of mics. Their tour manager was there too and had the best voice of everyone. It was really bizarre. We all went in there and sang those back-up harmonies.”

The grunge-y “MetaGoth,” a tune that features spooky spoken word vocals, came together one day when Deal and her sister were jamming with drummer Jim McPherson in the basement of bassist Josephine Wiggs’ Brookyn, NY apartment.

“We were just practicing and working on things and coming up with a rhythm of some sort,” Deal says. “Kim and Jim started playing this one beat. Kim said, ‘What would do to it now?’ Jim said we didn’t need to change anything. He was thinking it would be like a Bauhaus kind of thing. I detuned my guitar a little bit because that helps sometimes when you want to come up with new things. I had a pedal that I used on it, and we were really digging it. Jo [Wiggs] was not there. Jim was playing the drums. I was playing the guitar bits, and Kim said Josephine would sing it, and she came up with the amazing lyrics and the groovy guitar bits. That was a fun song to record, and it’s fun to play live.”

While it sounds like the album’s songs came together naturally, Deal says that wasn’t always the case.

“Some of the things came easily,” she says. “‘Wait in the Car’ and ‘MetaGoth’ were really cool and easy. Some were just torturous. There’s one song which I won’t name that we just obsessed over. Josephine said if anyone brings it up, she’s quitting the band, but I want it to be on the next record regardless.”

Deal admits that having side projects has helped to keep the band, which has had different lineups throughout the years, going for nearly 30 years now.

“We all play music either with this band or outside of the band,” she says. “We always will. Jim is still in Lab Partners. Josephine is finishing up an instrumental record. I still work with R.ring with Mike Montgomery. I produced their most recent album and sing on two songs. We’ll always do something. The Breeders even have a new song that we’re working on. We’re going to play it live tomorrow. [If we weren't getting along], I don’t think [the band] would be sustainable. People would do other things. We’re at the point where nobody is going to choose to be miserable.”