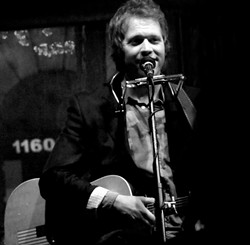 Michelle Romary
Local singer-songwriter Brent Kirby models 10 x 3, the weekly singer-songwriter showcase he hosts at Brothers Lounge, after off-night jam sessions he would attend when he lived in Nashville just over a decade ago.

One such event was called 12 on 12th, and it featured 12 bands playing the club 12th and Porter. Bands would play two tunes, and acts coming through town would sometimes sit in.

As its title implies, 10 x 3 features ten singer-songwriters playing three songs each. The restrictions: Two songs have to be original, and one can be a cover tune. Bands must sign up ahead of time, and then Kirby gives them a specific time slot.

The event has been going strong for six years at Brothers Lounge and celebrates its anniversary at 8 p.m. on Wednesday, June 21, with a special show that features 10 singer-songwriters in the club’s Wine Bar and six bands in the concert hall. Admission is free.

“In the six years that the 10 x 3 has been happening, we have featured over 3500 songwriters from Northeast Ohio in addition to touring artists and international performers. Every week is completely different and unique,” says Kirby in a press release. “I have pushed to create an example of how music should be listened to. I turn off the TV and ask people to turn off their cell phones and keep the conversation to the transitions in between acts, and it’s become a pretty amazing listening room that everyone respects.”