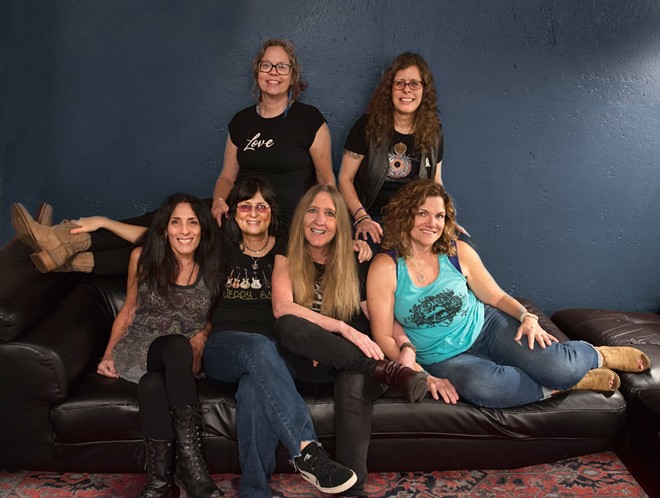 “I learned drums from listening to Van Halen and from Genesis when Phil Collins took over and they were a little poppier and some Motley Crue and Whitesnake,” she says in a recent phone interview. Brown Eyed Women, a group of female musicians who pay tribute the Grateful Dead, perform on Saturday, Sept. 24, as part of the Networking Is Dead benefit that takes place at the Beachland. “I grew up on songs with harmonies, and there was always the Beach Boys and the Beatles. Those things became natural for me to play on the drums.”

She’d eventually transition into listening to and playing the music of the Grateful Dead.
And then, a few years back, a caller to the Tales from the Golden Road Sirius XM radio show on the Grateful Dead channel called in to see if there were women playing Grateful Dead music. Host David Gans mentioned Parent, with whom he had played, and singer-guitarist Joni Bottari.

“[Gans] named us, and we became friends,” says Parent. “It was such a nice experience to find a woman who played Grateful Dead music. I needed a Jerry [Garcia] girl and Joni [Bottari] is pretty spectacular in that department. Between her contacts and mine and some Facebook stalking, we were able to find women in other states. It’s been quite the ride. It’s a nice experience for all of us. Moms are bringing daughters to the shows. Sometimes, three generations come out. It’s a warm, fuzzy feeling playing music we love for people who might be just getting turned onto it and some who know it and are impressed by our playing. We do all periods.”

The band knows just shy of 100 Dead tunes. Since members don’t live in the same state, it’s hard to rehearse, but they can rely on their collective experience.

“We spent a lot of time talking about the songs and making suggestions for transitions or jams in the middle,” she says. “Sometimes, we hop off the plane, and we’re playing together without playing together for three months. But we are all seasoned. We came together for our love of it, but also our experience in it. I’m about 30 years into the Deadbeats.

One staple in the sets, obviously, is “Brown Eyed Women.” Brown Eyed Women's version of the tune possesses a distinctive twang and has a Band-like vibe.  A mid-song guitar solo in their cover of the track really sparkles.

“It’s a great song to sing,” Parent says of the tune. “Over time, there’s things where I’m singing a Jerry [Garcia] song. We do get to take that on and have our own interpretations of those songs. We approach them differently and bring a feminine experience. Jill [Simmons] sings 'Bird Song' in a higher register, and it just sounds very sweet and has its own power.”

Parent says the band is particularly excited about the upcoming Beachland gig that’ll help raise funds for Journey Center for Safety and Healing.

“Being able to help women in any way is at the forefront of my mind,” Parent says. “This is a great opportunity to help families coping with domestic violence. I hope we can raise a good amount of money for them.”