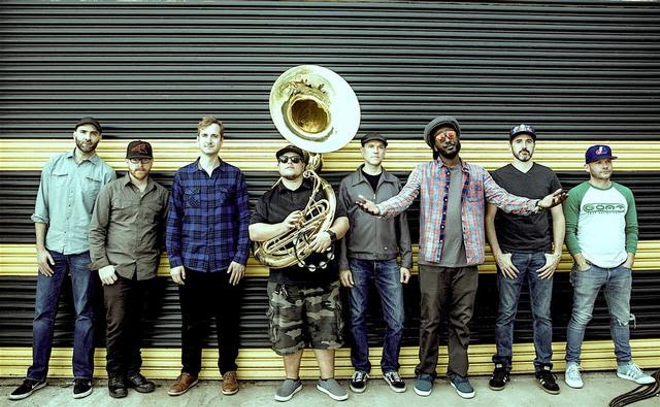 Courtesy of Nighttown
Composer Lance Loiselle started the LowDown Brass Band about 15 years ago when he and his bandmate Dave Levine were at DePaul University.

“Dave [Levine] and I and [saxophonist] Chris [Neal] played in a band together, and we got done with a rehearsal and were listening to some New Orleans music,” says Loiselle in a recent conference call with Levine. The group performs at 8 p.m. on Thursday at Nighttown. “We realized we all have an affinity for brass bands. Dave came up with the idea of starting our own brass band. It began as something fun for us to do together. But instead of just doing it for fun, it’s become a well-oiled machine and just evolved in the last few years.”

A recent trip to New Orleans, where the group opened for the Dirty Dozen Brass Band, proved particularly inspirational.

“It’s really amazing how warm and open everyone in New Orleans was to us considering that we’re a brass band from Chicago,” says Levine. “The fact that everyone opened their hearts to us was a really humbling experience. It was great to plug into that energy. After just a couple of hours, you could see how it energized everyone.”

The current tour comes in support of the band’s latest effort, last year’s LowDown Breaks. The album features a heavy hip-hop influence that’s the result of collaborating with MC Billa Camp, a guy who first appeared on 2014’s LowDown Sounds.

“That album brought [Camp] into the fold, and we decided to add him as a full-time member,” says Levine. “As a result, we wanted to make something that was very hip-hop centric and would feature him. It’s also something that’s an old school throwback to those early hip-hop and breaks producers from Erick Sermon and Jam Master Jay. Lance worked with other DJs and producers and recording engineers in town and orchestrated an album that uses our own tracks as samples. It has an old school feel, but it’s our original stuff.”

“Grind It Out,” a breezy track by trombonist Raphael Crawford, sounds like it could be on the soundtrack to a blaxploitation film and shows off the band’s jazz chops.

“A good five guys in the band write consistently, and everyone brings in original compositions,” says Levin. “Raphael has a wide range of styles, so there’s second line in there and a reggaeton feel, and we break into this hip-hop thing in the middle. He writes with complexity, and the song is a horn-heavy track with a powerful beginning. It leaves some openings for Billa Camp in the middle too.”

The song even got picked up by a playlist on Spotify and has received some attention even though it's not the album's single.

The guys also turn in a jazzy rendition of the Tribe Called Quest track “Can I Kick It?” Their version features tongue-twisting raps but adds bursts of horn.

“It’s the classic call-and-response tune put out by Tribe,” says Loiselle. “We wanted to do the song before [band member] Phife Dawg died. It was just coincidental that it happened that way. I knew Billa knew it, so one day I started playing the bass line. Then, we just got into it. It originally uses a ‘Walk on the Wild Side’ baseline, but we do it with sousaphone.”

Levine says the live show features “a lot of energy.”

“There’s varying styles going on — hip-hop and soul and R&B and reggae,” he says. “We have lead vocals and harmonies and that differentiates us from other brass bands. It’s vocal heavy, and we’re relatively accomplished vocally versus your standard gang-style vocals that you get with other brass bands.”

The band plans to play a few new songs from a forthcoming album too.