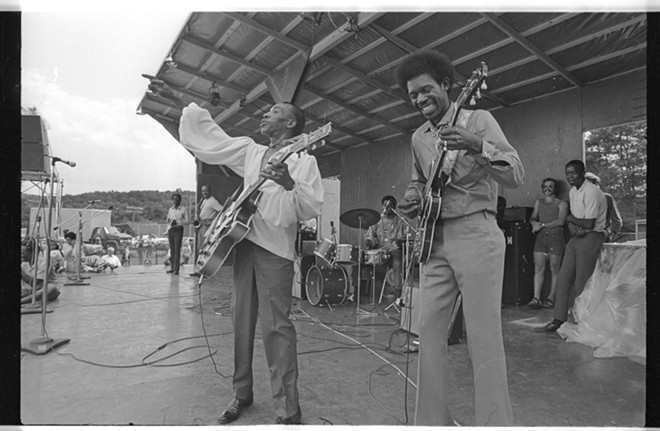 While the Ann Arbor Blues Festival doesn’t carry the same cache as Woodstock, it’s still culturally relevant and the release provides an in-depth documentation of it.

One of the student promoters, Clevelander John Fishel, enlisted his teenage brother Jim Fishel to help record the festival, and those tapes are the basis of the reissue, an enormous undertaking that includes expanded liner notes filled with photos and text.

“My brother was the entertainment chairman and co-promoter of the festival,” says Jim Fishel, who adds that he originally became a blues fan after meeting B.B. King through local singer-guitarist Robert Lockwood Jr. “He promoted it, and I drove up from Cleveland not expecting it to be great. I went with six classmates [including James Emery, who'd go on to become a noted jazz guitarist] from Shaker Heights High. The whole theme of the festival was that the black blues artists were the innovators.”

Taking a small Norelco tape recorder from set to set, Fishel and his friends took a field recording-like approach and simply let the 1⁄4-inch tape roll.

“The two things I grabbed at the last minute before I left for the festival were my recorder and my Kodak camera,” says Fishel. “I just wanted to have some mementos. There were lots of artists whose sets I wanted to listen to again. The hard part was that we were running around that entire festival, and you could tell from the quality of the recordings that I was sometimes standing on the stage or beside the stage. We had no intent of making anything that sounded great.”

Fishel ran out of tape and had to buy more from a photo store. He might've even have recorded over some noteworthy performances.

“The tragic part is that I can’t find the recordings of Sleepy John Estes, the country blues artist,” says Fishel. “I’m not sure if I recorded over them. Luckily, when my tape ran out on the last evening on Son House, a guy who just retired as a professor at Brown University had a tape of that performance, and we licensed that. And for the Otis Rush set, the tap malfunctioned. The recording on the collection comes from the benefit for the 1970 festival that Otis played. It was a challenge. Bob Frank [of the local swing band] Blue Lunch also had some photos.”

Fishel's tapes, long thought to be lost, have been restored to capture the electric energy of the landmark concert. Parker Fishel and Jim Fishel produced the album, and the project was coordinated by Third Man co-founders Ben Blackwell and Ben Swank. Both volumes include never-before-seen photographs, artist biographies, an exclusive reminiscence from Jim Fishel, and extensive liner notes by Parker Fishel, Sophie Abramowitz and David Beal.

Fishel’s son Parker was the impetus behind the release.

“When [Parker Fishel] went off to Columbia University, he was working at WKCR and started going through my boxes in my basement,” says Fishel. “He found these tapes. I knew about them, but I hadn’t thought twice about them. They were these tiny three-inch reels from this lousy Norelco recorder. He said, ‘Can I take this back to the station and listen to it?’ I said, Yeah.’ That was the start of this project. My son would send us dubs and said we shouldn’t ruin them by equalizing everything.”

Parker Fishel originally planned to play the recordings as a part of a special one-day only event at WKCR. There was a management change and they never aired. Seven years ago, they took the tapes to White Stripes singer-guitarist Jack White to see if he’d want to reissue them on his Third Man Records.

“We went to Nashville [to see White], and five minutes into the conversation, he said he loved it,” says Fishel. “I told him the back story about how I had been a teenager in Cleveland and went to the festival because my brother, who had graduated from Shaker Heights High in 1966, was a promoter.”

“I like how Roosevelt Sykes leads it off,” says Fishel when asked about his favorite tracks on the album. “I had never really listened carefully to him and he was singing his double entendre songs. He had people in rapt attention. Then, when B.B. King arrived, he got supercharged for his set when he saw the other artists. He said it was like a homecoming. He followed Sykes around. He played a ferocious set. Some of the people like Luther Allison were so raw. He was not the most technically proficient, but he had natural showmanship. James Cotton, who I had seen twice at [the defunct Cleveland club] La Cave was such a showman that he jumped off the stage. It was just a rockin’ thing.”

Fishel says that when Son House began to sing, “people stopped dead in their tracks.”

“Perhaps the greatest performance of them all — and it’s the only thing that has come out previously — is Magic Sam’s performance,” says Fishel. “We felt beholden to [label owner] Bob Kester and gave him the Magic Sam performances for Delmark Records, which still has robust sales. The set was completely over-the-top. The sad thing is that [Magic Sam] died shortly after the concert.”

The package will also include 13 reproductions of original news articles and ads on newsprint paper housed in a hand-stamped envelope. It all comes in a telescoping box printed on the same silver metallic paper as the poster reproduction with poster art on the cover.

“The festival was a touchstone,” says Fishel. “[Singer-guitarist] Bonnie Raitt talks about how this was like Woodstock for the blues. Woodstock was ridiculous on lots of levels, and I wish that I was there, but this festival was the first festival dedicated to black performers — other than Charlie Musslewhite, whose band was three quarters black. The whole idea was to expose a wider demographic to the real musicians that others were just copying. B.B. King once said to me that many white guitarists have the feeling for the blues, but you have to have lived it to play it.”