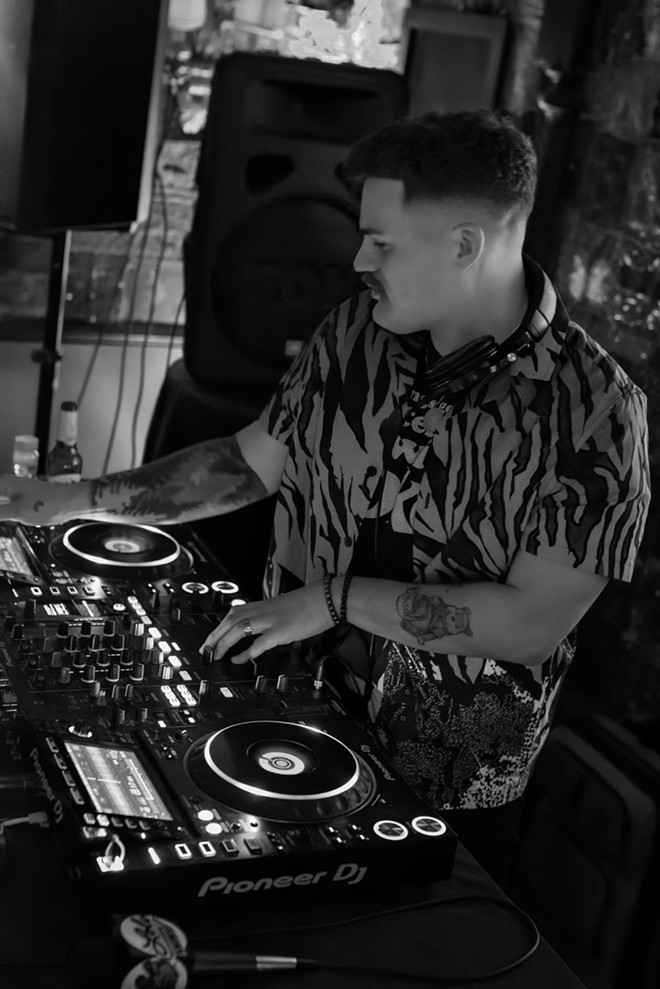 Ricky Spanish
Cardio.
Born and raised in Cleveland, Benjamin Rosolowski, who records and performs as Cardio, grew up listening to classic rock acts such as Pink Floyd and Led Zeppelin. As a youth, he analyzed the production elements and structure of these sounds as he began his musical journey.

“It’s hard to ignore rock ‘n’ roll growing up here,” Rosolowski explains in an email exchange. Cardio plays a release party for his new album, The Source, at 8 p.m. on Friday, Feb. 3, at the Winchester Music Tavern in Lakewood. The album comes out on Friday, Jan. 20. “However, rock wasn’t the first thing I dove into as a kid. It’s safe to say my mom is where I get my blend of tastes from. She was always buying me CDs. I can remember in our car rides there was always music on; it was usually turned up and my mom was singing. Artists like Prince and Madonna owned the radio back then.”

Rosolowski says he started listening to N’Sync and the Backstreet Boys before Linkin Park’s 2000 album Hybrid Theory “changed his life.”

“I didn’t know anyone could do what they did on that album,” he says. “As I got into my teenage years and could really start choosing what I was listening to, I got into the Beatles, Metallica and Led Zeppelin. I remember telling myself that I wanted to be like my cousin Chad who was a big Metallica fan, so the first CD I ever purchased with my own money was Master of Puppets. On rotation, it was Master of Puppets, the Beatles One and Led Zeppelin’s Early Days and Later Days.”

"When Man on the Moon came out, I could not stop listening to it," Rosolowski says. "I kept thinking, ‘Here is this guy from Cleveland doing the thing I so badly wanted to do.’ That album was so motivating at the time. Music was always so important to me, and it took me a long time to realize that I didn’t have to live in any specific genre. I didn’t have to define it. I just love and respect all music. I don’t think I would have the range of love I have if I didn’t grow up here in Cleveland ,and I’m so thankful for that foundation.”

Rosolowski, who first picked up the cello at age 3 and then and later learned to play guitar, drums, bass and piano, says he always had “a drive to create.” At 14, he took over the family computer and started using a free software called Guitar Tab Pro. With that program, he could write out all the parts for a full band.

“It was so wild to me, and I could do it for hours,” he says. “So that’s what I did all high school in between video games and not doing my homework. I was big into the Finnish metal band Nightwish at the time, so I was writing music inspired by them. Later, I had gotten my hands on Garage Band and Logic and really started recording guitar parts and using Midi for drums — just to get ideas out. This went on for years until I was 27 when I really started learning how to mix and master.”

A near-death experience that took place a few months before his wedding had a major impact on him. He and the woman who would become his wife opened a bottle of wine and sat down to watch a movie. Rosolowski suddenly collapsed, and he had to be rushed to the hospital.

“As cliché as it sounds, the experience left me with two things I knew I needed to do,” he says. “The first was to marry this amazing woman who just saved my life. The second was to pursue this passion I had for music. I didn’t know what that meant at the time. After our wedding, we purchased tickets to [Electric Daisy Carnival] Las Vegas. My brother and his friends had been going for a few years and we both were looking for a new experience. Like a lightbulb turning on in a dark room, I remember being there and saying to myself. ‘This is it.’ This music is something I could do. I remember dancing to the music and feeling so free. It was like years of therapy I needed in only three nights. So many failed attempts at keeping bands together, wanting to push in directions other didn’t. Electronic music was the answer. I could write music on my own and release it, and I knew there was an audience for it.”

That festival in 2019 unlocked memories of hearing techno on college radio and house parties he would throw in his early twenties.

“Originally, I was going to call myself the Cardiologist, but it’s way to long,” he says. “So, I shortened it to Cardio.”

Cardio released “Silence,” his first official single, in 2019. Singles “What Do You Want?” and “Breathe” followed.  This past summer, Rosolowski had been finishing tracks and normally would just release them as singles. But these songs felt different.

“The idea of having an album was so far away from me I didn’t even realize it until I showed the songs to my friend,” says Rosolowski. “He said, ‘Dude, you have a lot of un-released songs.’ Then, it clicked, and I was like, ‘Holy shit! I think I have an album here.’ From then, I worked endlessly to finish up the album. I even had the album art before I knew I had the album. One night, there were a swarm of cop cars at the end of my street. The twirling lights shining through the blinds made these cool color patterns on the wall. I snapped a few pictures without thinking. I later took those photos and blended them together to create the deep purple album art color.”

He recorded everything in the spare bedroom at his house.

“I mix and master my own music, so there’s no need to outsource anything which really shortens my timeline,” he says. “The self-editing process was the most grueling part of it all. Normally, you have the artist and the producer in the room making edits and bouncing ideas off each other. Having to be both can be a real challenge. The artist wants freedom, and the producer wants what is right for the song. Getting those two things in line takes a lot of time and can really take a toll mentally. It was very important to step away at times and come back with a different point of view during that process.”

For this album, Rosolowski says he didn’t want every song to just sound like a different version of the same song.

“I wanted to break down genre walls and challenge what an electronic album can be,” he says. “[I wanted] to gently dig up the roots of electronic music and re-arrange them to grow something new like my musical idols before me. I’ve been saying ‘art is the expression of experience.’ This album is the reflection of the last 31 years years of loving music and the angst and anxiety from feeling like I had something to say but just could never find the words. [It’s about] wanting to break out and express these emotions I’ve been feeling for so long. This album is that release. [It’s] a story I could only tell through music.”

Rosolowski says the live show will be “a resemblance of what you can expect from a quality electronic music show.”

“There will be lights, visuals, bumping music, the energy of the DJ playing the tracks they enjoy,” he says. “[There will be] people singing, dancing and expressing themselves freely. I’ll be performing music from the album along with some tracks that have influenced me. It’s a fantastic lineup of artists and members of the community who are great people.”

The lineup includes Chris Capuano, a local artist who makes his own music and has performed at Lost Social Lounge and various underground events, and LOLO, a female Afro/Latin DJ who hosts her own radio show and has her own art gallery located at the 9. Two brothers — Druid and 2Els — will deliver a special Back 2 Back set. And finally, the bill includes special guest Govan Jones, a guy who produces his own music and has “one of the best energies behind the decks,” as Rosolowski puts it.

“I want to curate an environment of acceptance and self-expression where members of every community can feel free to be themselves,” says Rosolowski. “We’ll have local artists, one of them being Nylerica Reyes (Instagram: @_nylerica), a very talented makeup artist who also creates black light paintings. The best part is that it’s all happening at the Winchester. A decade ago, I played there for the first time as a drummer in the Brittany Reilly Band. So, to come back for the second time 10 years later and put on this show is full circle for me. I couldn’t be more grateful to all those involved to help make this a reality.”