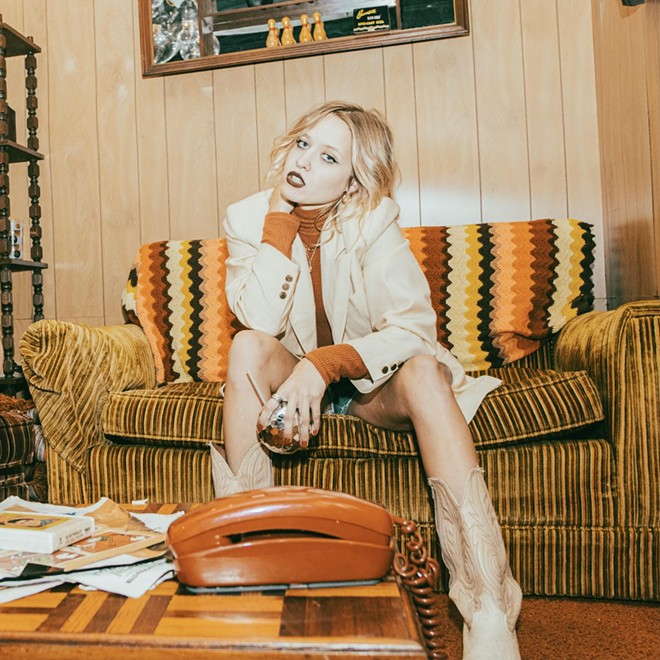 A Twinsburg native, Cunningham grew up traveling frequently with a musical family. Her father taught her how to play piano and sing harmonies, and she played and sang in church in her youth. Branching out from the church has allowed her to stretch her wings musically and experiment more.

Samfox made waves in Cleveland over their four-year run. The group included Cunningham on vocals and piano, Braxton Taylor on guitar and vocals, Randall Hoyal on guitar and trumpet, Josh Montgomery on drums and a revolving door of bassists.

Cunningham mentions Patsy Cline on her new album but says that ABBA, Tame Impala, the Marías and BRONCHO were on the forefront of her mind while recording Existential Crisis, a departure from Samfox’s blues-infused rock that embraces more of an electro-synth pop vibe.

The music has variety, though; with “Heavy” one can’t help but feel the syphoning of Debbie Harry with its infectious disco swagger while songs like “Ohno!” summon a Caroline Rose sardonic narrative with a bouncy beat. The song “Woman” casts a seductive and sensual spell over the listener, much like a War Paint song might.

“‘Woman’ has a lot of religious themes, as do a few of the songs on this record, because as I was working on this record, I was on the journey of challenging the doctrine I was taught and leaving that all behind me,” explains Cunningham. “So if I sound confused and a little bitter in this song, that’s why. Like in the lyrics ‘If we truly are the fall of man, we might as well have a little fun destroying God’s plan. If my short skirt and high heels change the way that you feel, take my hand, I’ll show you the real promise land.’ I am basically poking fun at the religious men that used to scream at me from the pulpit. It’s my attempt at trying to get some fun out of these deeply sexist ideals and misplaced responsibilities put on women in the church — or any woman in general. The idea of ‘What was she wearing? Oh, she was asking for it.’ News flash: I just thought I looked cute. I wasn’t asking for anything. Leave me alone.”

Cunningham’s narratives aren't only seductive and bird-flipping to the pulpit (she has a song called “God?”), but they also leave her vulnerable in their candidness. Although much of it can be perceived as playful in a way that is empowering, there are also times when she reveals her fears and anxieties and tenderness. In “Ohno!” she sings:

“I am by nature an avid people pleaser,” continues Cunningham. “I always thought it was normal to take everyone else’s feelings into consideration before your own and to adjust according to other people to keep them happy while you suffer in silence.”

The writing process for this album was a collaborative exercise between her and her producers, Hunt and Chips. Hunt (AKA Muzzy Fossa) designed the architecture for the majority of the songs with Chips working on a couple tunes as well. Cunningham listened to these tracks and began to construct her vocal parts just above the surface of the finely-honed arrangements.

“With Nate [Hunt], it was a whole new ballgame. He would send me a track of music usually finished, that he had been working on, and I would listen to it over and over and over until I got to know it really well, and then I’d get an idea for the storyline and the lyrics. I really wanted the song to tell me what it wanted to be about. I wanted to really diagnose what feelings it was giving me while listening. Then, we would meet up at his home studio, get a bottle of wine or two and get to work! He is such a visionary and such a talent to work with.”

The production on this album is top-notch; Cunningham’s voice is stellar, and the songs are fun and danceable. Also, there is a genuine spirt of self-reflection with openness to share her story. The release is rife with empowerment for women without the heavy-handedness and served with a sidecar of sex appeal. I could see her on stage at Coachella for sure, hats off to her.

Existential Crisis will be released digitally on Sunday, and the release show will feature Cunningham with Trevor Adams (Son of Scott) and Grace Sullivan (Wish queen) at 8 p.m. on Saturday, Aug. 13, at Lake Affect Studios. The cover is $15, and Cunningham will have merch for sale for the first time.