The singer-songwriter has already put out the EP's first single, 'Golden Hour' 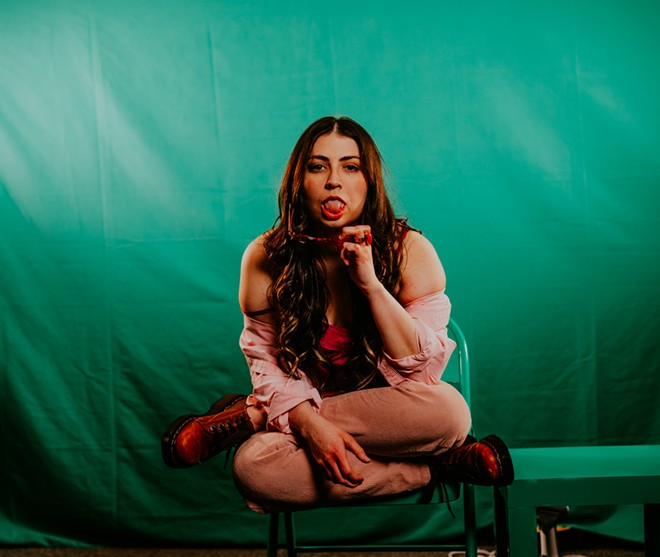 Courtesy of WTF Publicity
Molly O'Malley.
Though non-binary singer-songwriter Molly O’Malley grew up in Louisville, they went to their first concert in Cleveland, where they have family. Only 12 at the time, they saw Relient K and MXPX play at House of Blues.

“I remember it vividly because it was such an experience for me,” says O’Malley, who now lives in Cleveland. Molly O’Malley releases a new EP, Nobody Parties (Like Molly) on Thursday, Oct. 20, and performs at the Birdhouse in Lakewood on Friday, Oct. 21.

While growing up in Louisville, O’Malley listened to a bit of everything.

“I listened to a mix of rock and a great amount of metal,” she says. “I was all over the place. I was also into some hip-hop and a little bit of pop. I just really appreciated music and enjoyed it for what it was.”

O'Malley played in their first band at age 16 and started writing songs at 19. Though O'Malley now records as Molly O'Malley, the first album O’Malley released came out under a different name.

“It was Molly the Impaler,” laughs O’Malley. “The first time I played a solo show, my friend asked me to hop on a bill with a touring band that was coming through town, and I told them to make something up for my band name. It stuck from there. The older I got, I thought it wasn’t fitting. For a while, it did stick.”

O’Malley released their first record under their own name in 2017.

“The first two records were just me and my piano,” O’Malley says. “I hadn’t developed a skill to write on all the instruments yet. It was just piano. I would say those albums came pretty fluidly. I also wasn’t overthinking my songwriting. Let’s just say that there weren’t a lot of revisions”

In 2020, right as the pandemic hit town, O’Malley moved from Louisville to Cleveland.

“My partner thought it made sense,” O'Malley says. “We did that and then everything shut down. It was a very wild experience. The first year I was here, I was holed up in the house. The past year, I’ve been able to experience the city, and it’s been really great.”

Stuck at home, O'Malley worked not only on the EP due out later this month but also on a full-length that's nearly complete.

“That song is in [about] breaking people pleasing,” O'Malley says. “You give a lot of yourself to other people and don’t have enough of yourself at the end of the day because you’re using all your energy up. There are three different songs on the EP altogether. They come from different emotions. 'Hopscotch' is about trying to be vulnerable. It’s also kind of cathartic. 'Diern' is about people being shitty and not being self-aware and knowing the things they say can hurt other people.“

For the accompanying "Golden Hour" music video, director and cinematographer Alex Zarek captures O’Malley in various places, such as high-rise city rooftops and empty sunset beaches, all during the “golden hour” to really give a visual for “the feeling of a longing for something more.”

O’Malley, who recorded two of the new EP’s songs at Two Worlds Recording Studio in Queens and one song in their basement, strove to diversify their sound this time around.

“Whenever I’m writing, I want to figure out how to portray the emotion," says O'Malley. "On ‘Diern,’ the anger and frustration wouldn’t make sense with tones that are dreamy. I want to portray the emotion, and that’s probably why so many things sound so eclectic. If I’m going for anything, it’s for portraying the emotion the best. I grew up on a lot of pop-punk. Relient K was a gateway band for me. It was ironic that they were from my family’s hometown [of Canton]. They write about things that Midwest people can relate to.”

O’Malley admits that a wider range of music has made its way onto their playlists over the past few years.

“The older I’ve gotten, I’ve become less of a genre snob,” O'Malley says. “Now, I realize that all music genres serve different purposes. Someone might say a party pop song is trash. I understand that, but if people go out and drink, that’s what they’ll listen to, and that's fine. Now, I’ll listen to anything. Back in the day, I was definitely a genre snob.”