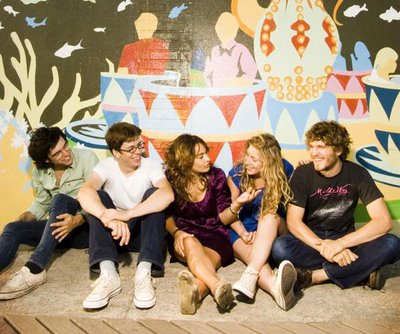 Ra Ra Riot pulled in a nearly full house at Akron's Musica last night. The 350-person venue slowly filled as the three opening bands blew through their sets. The 40’s, from Canton, opened with a strong energy that got the early birds jumping. Illinois-based So Many Dynamos (read it backward -- it’s a palindrome!) shook the walls with “We Vibrate We Do." Cut Off Your Hands continued to shake it up a bit with a strong rock sound and an unpredictable set.

Ra Ra Riot’s setup was long, but when frontman Wes Miles stepped in front of the mic, the crowd cheered. Rebecca Zeller danced with guitarist Milo Bonacci when she wasn't leaning in to her violin with the seriousness that comes from a classically-trained musician. Alexandra Lawn’s barely there electric cello eclipsed her tiny frame as she pulled a bow as long as her arm across the strings. Both she and Zeller jumped with the beat while the focus turned to guitar and drums. Bassist Matthew Santos was all over the stage, rubbing heads with Miles and Bonacci, leaning in to Lawn’s cello and taking over the keyboard when Miles wasn’t playing it.

When Ra Ra Riot played their most popular songs, “Can You Tell” and “Each Year,” the audience sang back, even more heads moving to the beat. The most emotion from the stage came during the final song in the set, “Dying Is Fine”: “I wouldn’t like death if death were good.” The death of drummer John Pike last year certainly informed the song's subtle sadness. Called back for an encore, Ra Ra Riot ended with a new track that left fans looking forward to their next record. —Crystal Culler