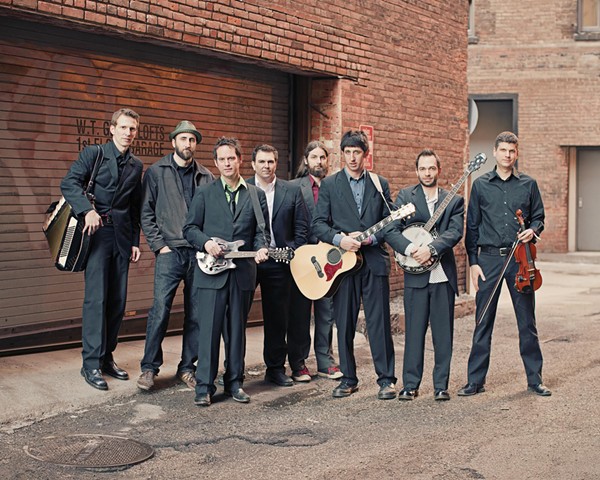 The Boys From the County Hell

When the Boys from the County Hell first got together in 2000 as a Pogues cover band, it was supposed to be just a one-night stand. But after selling out their first show at the Euclid Tavern, the group's popularity escalated. The band's been working on blending some horns into the mix so expect to hear a bit of R&B as it plays a selection of Pogues tunes when it kicks off its busiest time of the year with this warmup gig before the mayhem of St. Patrick's Day truly begins. (Jeff Niesel) 8 p.m., $15. Music Box Supper Club.

Into the Blue: Grateful Dead Revival

Regardless of your take on the Grateful Dead, the band to which Into the Blue, an ensemble of local musicians pays tribute, the group maintains a damn important stature in the rock 'n' roll canon. Into the Blue revives that spirit and lends it the respect Jerry and Co. rightfully deserve. Anyone interesting in hearing — and seeing — great music flow from the stage should check out what these guys are doing. Fellow musicians and artists will glean inspiration. (Eric Sandy) 9 p.m., $10. Beachland Ballroom.

While last year's War & Leisure isn't necessarily a political album, it does reflect singer Miguel's views on current events. Songs such as the woozy album opener "Criminal," a tune that features a cameo from rapper Rick Ross, shows off Miguel's sensual voice and features shimmering synthesizers that make it sound particularly lush. Tonight's concert supports War & Leisure so expect to hear plenty of songs from it at the show. (Niesel) 7 p.m., $37.50 ADV, $40 DOS. The Agora Theatre.

Touring in support of Part Of You, the second of a three EP series that began with last year's Part Of Me, the indie rock act Good Old War recently reunited with longtime singer-drummer Tim Arnold. The album's mid-tempo single, "That Feeling," features cooing vocals courtesy of guest vocalist Anthony Green. Given the twangy nature of these tunes, expect them to become fervent sing-alongs when the band performs them live. (Niesel), 6:30 p.m., $20 ADV, $23 DOS. House of Blues Cambridge Room.

Singer-guitarist John Reis and singer-guitarist Rick Froberg, who played together in the San Diego-based post-hardcore band Pitchfork, started the garage punk act Hot Snakes together in 1999 with drummer Jason Kourkounis. The band would issue three studio albums before calling it a day. But the group reunited about seven years ago and will release Jericho Sirens, its first studio effort in more than 10 years, later this month. With its parched vocals and gritty guitar riffs, the album's single, the hard-driving "Six Wave Hold-Down," suggests the band hasn't lost a step. (Niesel), 9 p.m., $23 ADV, $27 DOS. Grog Shop.

A local singer-songwriter, Michelle Romary grew up in Dayton and attended Ohio University. She moved to Northeast Ohio in 1998 and took private lessons from a Baldwin-Wallace Conservatory of Music professor. As a Catholic cantor and soloist, she regularly sings at wedding ceremonies and funeral/memorial masses, singing both traditional and contemporary pieces. Guitarist Brent Hamker arranged the songs on her new album, Grounded, which was engineered by local producer and musician Michael Seifert. Album opener, "Home," began as a poem and then became a children's song before Romary tweaked it into the mid-tempo guitar-driven rock tune that's on Grounded. It's one of many solid tracks on the release. (Niesel) 7 p.m., $12 ADV, $15 DOS. Music Box Supper Club.

Arlington, VA seems like an unlikely place for a reggae band to prosper. And yet, that’s where SOJA formed some 20 years. The band would emerge to become one of the most popular U.S.-based reggae acts. And yet as much as the group’s profile has risen with each album and tour, the band sought to return to its roots for its latest effort, last year’s Poetry in Motion. On the song “More,” the band addresses the issue of women’s rights and advocates “treating our daughters like our sons.” On “Fire in the Sky,” another album highlight, Hemphill practically raps his way through the song as he delivers the album’s most spirited vocal performance. For the live show, the band tries to bring some positivity to the room. With their spirited horn arrangements and uptempo melodies, Poetry in Motion tunes such as “Moving Stones,”“I Can’t Stop Dreaming” and “Tried My Best” should help the band achieve that goal. (Niesel) 8 p.m., $25-$35. House of Blues.