The Faint of Heart destroy Valentine's Day with doo-wop. 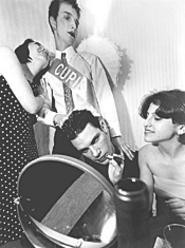 Walter Novak
The Faint of Heart aim to end Valentine's Day with a petition, a protest rally, and an album full of snarky sentiment.
Standing in front of American Greetings with a clipboard and a curled lip, Cleft S. is having a Hallmark moment from hell.

"Look at this! Look at all these hearts!" the frontman for the doo-wop troupe Faint of Heart fumes in front of the Tower City card shop on a recent Wednesday afternoon. "You're going down!"

With that, Cleft marches into the store, flanked by three-fourths of his backing band, two petite brunettes, and the group's lanky male organist, the Great Fandango.

"We have a petition to ban Valentine's Day, to fight love," Cleft tells the store's bewildered young clerk. "You're American Greetings, you're our biggest enemy."

The girl chuckles a little uneasily, then scrawls her name on the hot pink petition, ostensibly showing her support for the eradication of the holiday. For her efforts, she earns a flier to an upcoming show.

"Yes!" Cleft hisses as he continues canvassing the mall, getting about a dozen signatures from individuals as various as teens and Taco Bell workers. Most people laugh when Cleft approaches them (the security guard at Victoria's Secret is a notable exception); others wave him off as a well-dressed pest.

By now, Cleft is used to rejection. It's what led to the formation of the Faint of Heart to begin with. Tempering heartache with three-part harmonies, glockenspiel, satin, and sarcasm, the band is an anti-love lounge act that cheekily aims to end Valentine's Day with a petition, a protest rally, and an album teeming with snarky sentiment. It's a tongue-in-cheek way for the band to build an audience (those who sign the petition are added to the band's mailing list) as well as make light of failed romance. This is the Faint of Heart's true aim beneath all the shtick: to make a punchline out of sorrow.

Cleft's character is like Tom Jones with Tourette's. He doesn't sing as much as speak in key, backed by pockets of acoustic guitar and the coos of the three-piece Women's Corral Extravaganza. Cleft likens it all to Nick Cave fronting the Supremes, but it's more akin to Belle & Sebastian doing shots of battery acid. "If I had to choose between cocaine and you/I don't know what I would do," Cleft croons on the band's self-released debut, Kiss and Make-Up, an infectious, faux-forlorn romp that conjures tears of laughter, not sadness.

For Cleft, all the jokes are rooted in genuine melancholy. The concept of the Faint of Heart was born two years ago, while he was attending The University of Akron as an English/philosophy double major. Late one night, he was serenaded by a group of disgruntled ex-girlfriends, who stood outside his bedroom window and delivered an a cappella take on the Rollins Band's "Liar."

"That's a true story," Cleft swears between sips of red wine at Capsule one evening. He's clad in a natty, vintage maroon suit with a navy blue tie, looking like a thrift shop with hair gel. "I was real depressed that year," he says, recalling a time when he was overwhelmed by girl trouble and intense studies. "I would write these songs in the middle of the night . . . just whispering into the microphone because everyone would be sleeping. I had no intention of really making a group out of it -- it was just to kind of cheer myself up."

The songs stood in stark contrast to the material penned by Cleft's full-time band, the progressive art rockers Headset, where Cleft played bass and keyboards. When the group burned out midway through the recording of its debut, Cleft turned his attention to his lonely, late-night songs, and the ex-girlfriend serenade sparked an idea.

"I just thought, What's the most outrageous way I can present this music?" he recalls. "An all-girl background group. Robert Palmer did it in his videos, but that wasn't real. So why not try to make it real?"

For six months, Cleft covered Cleveland in fliers, looking for female musicians. But by requesting "pretty ladies for an indie pop band," Cleft was quickly branded a sexist. "Obviously, you put out that ad because you want to be in a band with a bunch of hot bimbo chicks where you can run the show and tell us what to do," wrote a disgruntled lass named Sarah in a letter posted on the Faint of Heart website (www.faintofheart.net). After auditioning more than 30 girls, Cleft eventually found three who understood that he was more of a wise-ass than a womanizer (the current lineup is composed of singers Nadia Muqaddam, Meghan O, and Wanda Lemur).

"I don't know how anyone could find it sexist," Muqaddam says. "I've been accused of being a bit of a feminist, and I just thought it was funny."

Cleft debuted the Faint of Heart at the Grog Shop late last summer. Heavy on presentation, the band performed in front of a fiber-optic backdrop enclosed by 12-foot-long blinds. (Cleft builds sets at Akron's Carousel Dinner Theater by day.) Faint of Heart gigs are already among the most entertaining in town, high on Cleft's camp, with calls for audience participation and lots of free love advice.

The band is mounting its biggest production yet, an anti-Valentine's Day rally, this Saturday at the B-Sides Lounge. The group and its petitioners (dubbed the Pink Army of Heartache) will first meet up at the Caribou Coffeehouse on Coventry at 7:30 p.m., then march up and down the street with picket signs protesting the holiday.

Eventually they'll make their way to B-Sides for a party, complete with a rejection booth, a Wheel of Heartache, and a game of Smack the Bottle, which involves whacking, instead of kissing, the person the bottle points to. It's all good, cathartic fun, from a band that makes misery a sport.

"I was listening to Billie Holiday today, and it really took me back to when I was writing the first songs for Faint of Heart, because she sings the most depressing songs, but she sings them in a way that kind of inspires hope in you," Cleft says. "My songs are written in fits of despair, but I try and present them in a way that's humorous and tongue-in-cheek. I don't know if it gives anyone hope," he adds with a chuckle, "but it can at least make people laugh at things that are sad."