Frosty Sleeps With the Fishes

Let's put those overplayed Christmas classics to bed and download brand-new ones. 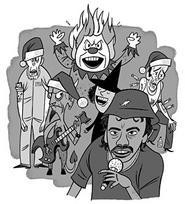 Mike Gorman
Christmastime is here. It's the most wonderful time of the year. Here comes Santa Claus. Jack Frost nipping at your . . . whatever. We've heard it all before, and we don't need to hear it again. Carolers of the world, unite: Next time a well-intentioned holiday mood-setter belts out "Rudolph the Red-Nosed Reindeer," pelt him with snowballs. Then kindly teach the poor sap how to download music, because the internet contains a treasure trove of new holiday chestnuts.

Check out our alternative Christmas mix:

"Christmas With the Devil," by Spinal Tap
Replacing Santa with Satan, Spinal Tap shows what a short leap it is from sleigh bells to hell's bells. Over a bluesy riff, the fauxtet comically defiles the season, rhyming "silent night" and "violent night." It's the perfect up-yours to all your friends who make you listen to the Trans-Siberian Orchestra at their parties.

That little ditty Will Ferrell sings in Elf
No modern Christmas collection is worth a fruitcake without Ferrell's 11-word, off-the-cuff ode to joy: "I'm singing/I'm singing/I'm in a store/And I'm singing." Takes a lot of eggnog to screw up this sing-along.

"Christmas in Las Vegas," by Los Straitjackets
Skipping the same old blah blah blah about snow and mistletoe, Los Straitjackets bring a whole new sound and look to the season. Decked out in Mexican wrestling masks, the Nashville quartet created a must-have, applying their surf guitars to holiday favorites on the disc 'Tis the Season for Los Straitjackets. Even without words, this kitschy original screams "Viva Los Holidays!"

"Brave New Christmas," by Gil Mantera's Party Dream
Of course, surf guitar might put the kibosh on your Christmas spirit. Or maybe nü wave's your thing? Regardless, this Christmas jam perfectly updates the jing-jang-jingling of snowbells. Sporting DayGlo ski gear year 'round, this Ohio duo crafted an infectiously peppy keyboard jam that bubbles with simulated grandfather clock chimes and a smattering of drum & bass.

"My Favorite Things," by John Coltrane
Every well-rounded Yuletide mix needs a jazz instrumental. John Coltrane's take on this Von Trapp family favorite strips away the gee-whiz lyrics about strudels 'n' noodles, while the looping piano hook and Trane's sax work pluck the tune from the Austrian hills, making it a true American classic. If you're dropping just enough jazz into your mix to look sophisticated, the melodic five-minute edit works best. But the skronking, 20-minute live version is a great way to empty out your holiday bash, once your sweater-clad guests have worn out their welcome.

"Kidnap the Sandy Claws," from The Nightmare Before Christmas
Make the neighbors' visiting rugrats happy with this show-stopping tune from Tim Burton's kiddie-goth flick. Three imps -- voiced by Danny Elfman (Oingo Boingo's main man), Paul Reubens (Pee-wee Herman), and Catherine O'Hara (the mom from Beetlejuice) -- argue about how to best sideline St. Nick while a soul-searching skeleton hijacks his holiday.

"Blue Christmas," by the Misfits
Show your Hot Topic-shopping nephew how real punks celebrate the holidays by cranking this bootleg recorded live at Max's Kansas City in December 1978. This abbreviated power-punk rendition finds frontman Glenn Danzig crooning, as he often did, like the King -- Elvis, that is, not birthday-boy Jesus.

"King's Crossing," by Elliott Smith
Here's another dark one that'll impress your indie-rock friends. On this black Christmas, Smith's Santa was skinny, and the bag he bore was filled with smack. With a hypodermic needle on his Christmas tree, the former Heatmiser singer and infamous junkie sings about spending a holiday in the emergency room, where he makes a chilling Christmas wish that didn't come true: "Don't let me get carried away."

"Christmas Rappin'," by Kurtis Blow
Fun fact: If producer Russell Simmons hadn't waited until the holiday season of 1979 to release "Christmas Rappin'," it would now be considered the first rap record. With a bumping bass line, this early hip-hop artifact is rooted in old-school funk. Everybody expects Run-D.M.C.'s amazing "Christmas in Hollis," so wow them with this truly older-school selection instead.

"Stocking Stuffer," by Grand Buffet
Santa's been giving you those wonderful gifts for years, but you were fooling yourself if you thought all those presents didn't come with strings attached. Over humming '80s-style keyboards, this alt-rap duo spins the kind of Santa story you don't usually hear: Old Saint Nick leans on a poor guy for some payback -- a one-night stand with his girlfriend. And in return, he gets something extra from Santa: a baby.

"Something Soft," by Andrew Dice Clay
Hands down, the best Christmas tune about freaky-deaky oral sex -- this song is rated Xmas for graphic language. None of the words are quotable here, but it's a surefire hit in the wee hours. Try playing just the first three words at the office party, and you'll have a class-action sexual harassment lawsuit on your hands.

"Merry F#%$in' Christmas," by Denis Leary
Not all racy Christmas songs would make 2 Live Crew blush. Incredibly catchy and not quite obscene, this old-time Christmas sing-along has the kind of lyrics your drunken granddad might blurt. Actor Leary slips back into the cynical comedic mode that made him famous: "Old Saint Nick's got bourbon breath/Streets so cold you could catch your death/A cop sold me some crystal meth/It's a merry [BLEEP]in' Christmas."