Faith Evans is coming to town -- but don't test her! 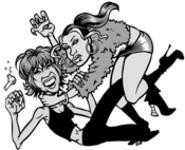 Faith, widow of the Notorious B.I.G. by the age of 25, had to publicly handle the tackiness of his tawdry affairs. Biggie's two mistresses -- pseudoporn star Lil' Kim and pseudorapper Charli Baltimore -- certainly tried her patience, and there were times when we were afraid she wouldn't make it, especially when Kim posed topless with the word notorious faux-tattooed on her torso for the cover of Notorious K.I.M. But our girl Faith handled the situation with grace and poise.

However, while we understand and appreciate that Faith is a classy lady, we sometimes wish we could see an all-out R&B diva throwdown. Admit it: It would be a whole lot more entertaining than trying to count the octaves in Mariah's whale song. And besides, why let the studio wankstas in G-Unit have all the fun?

In homage to Biggie's song "Dreams of Fucking an R&B Bitch" (rest in peace, massive one), and with all due respect to Lady Faith herself, we present these dreams of fighting an R&B bitch. Ladies, take out your earrings, pull off your press-on nails, and slather Vaseline on your faces. It's about to be a -- what? Girl fight!

The Revenge of the Snow Princess

On the surface, Faith and Whitney do have a few things in common besides singing. They both love bad boys who have a penchant for public adultery (Superhead, holla!). They also both enjoy skiing the kind of slopes found in places like Miami. Whitney's bout with the yay is lengthy and legendary, while Faith was arrested only last year with a satchel of the Bolivian marching powder.

So it's not exactly a shocker to see a flaky white substance scattered around the ring. As fight officials confer with one another, Whitney's dealer -- um, trainer -- insists (with a clinched jaw) it's only baby powder to keep them from slipping.

As the ladies step into the ring, the tension in the air is thick and the arena is silent, save for Bobby's sniffling. At this moment, it's just two bitches from Brick City, with everything to prove.

"Whitney! I love you, baby! Gimme a kiss!" Bobby shouts from ringside.

"Bobby!" Whitney calls, while dabbing a tear from her cheek. "I'm sorry, baby. I get so emotionaaaaaaal!"

With their pinpoint pupils locked onto one another, the couple simultaneously breaks into the Running Man. Bobby motions to the cameraman from his latest reality television show, Being Bobby Brown, to begin filming. Whitney is still doing the Running Man as Faith sneaks up and knocks her out with one quick blow to the chin.

"Damn, Faith. You on some Johnny Gill shit," Bobby snaps.

Winner: Faith in a first-round knockout.

Fantasia has just turned 21, but with a four-year-old daughter and heinous baby-daddy issues, the girl is on Faith's growing-up-fast track. Still, Fantasia knows it's a little ballsy of her to go after Faith, though she did receive more votes to win her 2004 American Idol title than Lil' Dubya did for his presidential election.

As the bell for the opening round sounds, Faith slaps Fantasia. Stunned, Fantasia swivels around and grabs Faith's hair by the tracks.

"Get her, Faith!" screams Simon Cowell from the front row.

Fantasia stops dead in the tracks and glowers. "But Simon, I thought you were my manager!"

"You should never trust a critic," the infamous Judge Dread remarks. "Especially not a British one."

"You hate this motherfucker as much as I do?" Faith asks Fantasia. Fantasia nods, and in an incredible display of solidarity, the two fighters embrace. The gasps of stunned audience members are the last things Simon hears as the two divas belt out one long howl disguised in messy harmonies and faltering pitches.

"I'm melting!" shrieks Cowell, as he is reduced to a puddle of muck.

Finally the title bout everyone has waited years for -- we're talking since before Kim grew titties and Faith abandoned the platinum-blonde steez (we might actually have Eve to thank for that, but that's another story). Standing at four feet one inch, Lil' Na Na has a slight height disadvantage. But with her patented power moves -- the silicone slam and the weave whack -- Kim has a few things working in her favor.

Faith makes her way to the ring as the crowd anxiously awaits Kim's arrival. Remember Alexis and Krystle fighting in the swimming pool on Dynasty? This is gonna be so much better than that. It's more like Ali vs. Frazier, Hulk Hogan vs. Andre the Giant, or even Jacki-O vs. Foxy.

Huh? What's that you say? Lil' Kim has been convicted of perjury and is on her way to sharing a jail cell with Karl Rove? Oh, yeah.

Cue the music. Looks like this one's been forfeited before it even had a chance to go down.