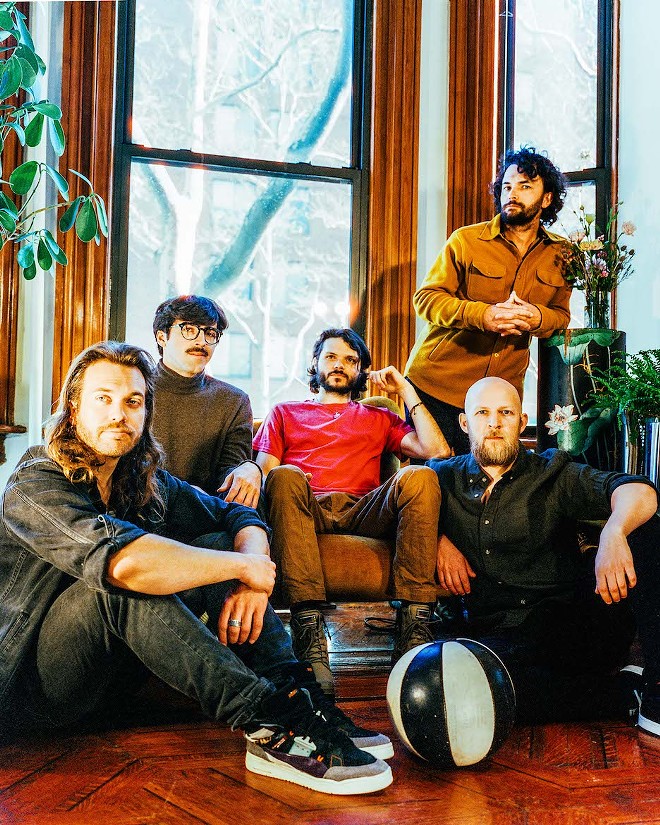 Everyone who knows jambands knows the biggest, most obvious influences: Phish and the Grateful Dead.

But Norwalk, Connecticut’s Goose has switched things up a bit, and found a shocking amount of success along the way. The band will headline two shows at Thornville’s Legend Valley on June 10 and 11.

Goose’s sound has a strong indie rock element. Vampire Weekend fans may be interested to know that Goose was commissioned to cover the Vampire Weekend song “20:21” and jam it out to… well, you can guess. And Goose’s new album, Dripfield, dropping in June, only ups the indie charms. But indie fans may be surprised to learn that fans will be driving from all over Ohio to catch the Legend Valley dates.

We caught up on Zoom with guitarist and vocalist Rick Mitarotonda a few days after they rocked 25,000 fans at Sweetwater 420 Festival in Atlanta with a packed second stage performance that clearly should have been main stage. The band has big things ahead, including not just the Ohio dates, but a full summer including a show at Red Rocks in Colorado that sold out shortly after going on sale.

Mitarotonda’s onstage persona is sagelike, and he lets cohort and keyboardist Peter Ansbach hold down the stage banter. Unsurprisingly given his vibe, Mitarotonda is a deep thinker who considers philosophies and approaches to music as much as he does scales and chords. But—surprisingly—he was more than willing to talk everything from music philosophy to the band’s upward trajectory to some surprising influences to his use of vocal effects like auto-tune, a controversial move for a jamband scene not accustomed to such shenanigans.

Why should people who are on the fence in Cleveland make the drive to Thornville?

Putting us aside, there’s something special about being outside of your comfort zone or space or city. Traveling to go to shows and have an experience opens up a lot of doors that otherwise you wouldn’t find down the street, would be my two cents on that.

You’ve played at Legend Valley before. Do you have any memories of Legend Valley or any experiences you’d like to share about the venue?

Every time we’ve gone there it’s been memorable. The first time we went there—I believe—it was for Resonance (Music & Arts Festival) in 2018. It was a big moment for us. It was a memorable weekend and we got acquainted with—I have a strange relationship with the word “fans.” I feel weird saying “fans.” We met some people that went on to become, I guess, fans of ours. That was super memorable, and then the two-night run that we did in 2021 was incredible. That was a really special two days that we had there. It’s impossible to quantify or point to what precipitates a good show. I think a lot of it has to do with being comfortable and being relaxed and everyone being calm and feeling good. We definitely felt that way during that two-night run.

How did the auto-tune get started and what is the inspiration? Out of everything you do, that is the thing that most distinguishes you from other jambands.

There’s a bunch of artists that I really like and find very inspiring, look up to. People who I consume, their work that uses vocal effects like that. I gave it a shot and tried it out some years ago. I find it has this really expressive quality. I think it’s an associative thing for a lot of people, an association that turns them off. I don’t have that association. Using it as an instrument, I find super expressive. It has become this notorious thing, that is what it is. I don’t like upsetting people or pissing people off.

Exactly. I like it. It feels good. If nothing else, that’s what it comes down to. I like it as an effect.

And when you say artists that inspire you, who specifically are you talking about?

The most obvious and most principal would be Vernon (Justin, a.k.a. Bon Iver), for sure. He’s a huge influence of mine, I look up to most of the things that guy has done. There’s a band called Poliça out of that same area, Minneapolis, that I think is so cool. There’s a handful of others, but those two are principal in terms of that influence.

How would you describe the influence of (Phish frontman) Trey Anastasio on your songwriting?

There was a period where that music was a far more palpable influence on my songwriting. Older songs that we play like “Flodown” and “Tumble.” Some songs, it’s very obvious that it’s heavily jamband influenced. When I was in high school, Phish was the thing. That band is a fairy tale. It’s incredible what that band is, you know? There was a period around 2013, 2014 where I started discovering modern indie folk Americana songwriting, whatever you want to call it. And I started listening to a lot of jazz. All these guitar players like John Scofield, Pat Metheny, that were really influential. As well as Phish and Dead were a huge influence at that time. That’s where my head was buried. Classical music. Otis Redding. Old reggae recordings, stuff like that. I was very out of touch with modern music. Fleet Foxes is really what opened the door to me. It was so transporting, that music. It took me places. That’s what music is all about. The more you’re able to transport or create a little world, that’s the stuff that I think is most interesting and most exciting. (Fleet Foxes frontman) Robin Pecknold’s early writing certainly did that. The self-titled album, the Sun Giant EP, the second LP, there’s a lot of amazing stuff on there as well. That eventually led to Bon Iver and Father John Misty, artists that were kind of in that world. It was funny, it was kind of like a joke to a lot of other people. “You guys know about this?” “Yeah, that was like five years ago, man.”

Thinking less about making art and more about what lies ahead for the band, I think it’s fair to say you’re experiencing exponential growth. The Red Rocks sellout. The massive Sweetwater gig. From that perspective, what challenges lie ahead for the band and how do you plan to meet or overcome them?

I think bigness presents a lot of challenges. And they’re sneaky challenges. I think the biggest challenge is remaining true to your original intent, your original reasons for doing what you’re doing. With success comes comfort, and with comfort you lose your edge. I don’t want to get too comfortable. As far as the band is concerned, another challenge is that we need to stay friends. I see all these massive, hugely successful bands. As we come up in the scene, we hear and see all these big bands that hate each other and don’t talk to each other and all get in their separate Suburbans and drive off. That sounds like a drag, you know? We’re not close to there now, but I can see how that happens. The amount of pressure that comes with the bigness, I can see that path. And subverting that path is an interesting challenge. Those are challenges. Egos go both ways. Egos can get really full or empty, and both are problems.

People have strong opinions about Goose. There are people that love and adore you. But on places like Twitter and Phantasy Tour, there are other people pushing back. What is it about Goose that inspires such strong opinions?

I have a tendency to feel unqualified to answer that. I think we all try our best to not be affected by that stuff. Obviously, the last thing you want is for that to inform creative decisions. We have our strategies and our ideas about how we want to grow the band. All that aside, how people view our music and how people see the band, I just feel incredibly unqualified to speculate on that for some strange reason.
There’s some irony in this but, despite being a member of Goose, you will never hear Goose. Physically, you can’t be in the audience when Goose is playing. It’s almost like I have no idea what Goose actually sounds like.

One thing that people have said about the spring tour is that there seemed to be longer jams, with less songs per set.

It wasn’t a deliberate decision. If anything, it was the opposite. I had this moment over the winter where I kind of discovered Cornell ’77 (legendary Grateful Dead show). I’ve known the lore around Cornell ’77 for a long time but for whatever reason never really listened to it. I had this assumption in my mind that it is what it is because there are monster jams, groundbreaking jams. And I kind of dug into it a little bit and was incredibly excited to find that that wasn’t really what made it so special. It was just a great show from a great band at a great time. They’re just slamming all their songs. We kind of talk about it every once in a while to different people, but the jam scene at a certain point in recent times became so much about “just the jams” or the cover set. You know, where are the songs? The jams are best when they are a celebration of the song, almost. But to your question, it was not intentional. What I was getting at was that I had this revelation about Cornell ’77. I got really inspired about it. And, you know, we want to work towards that concept in our own way. We want to focus on playing more songs and let the jams happen where they feel like we can’t contain them, like they have to happen.

What is your most listened to LP of all time?

That’s so hard, because it’s always phases. I feel like I want to say ten albums right now. The first Alt-J album (An Awesome Wave), I listened to so many times. They’re an odd case because they’ve made some cool stuff since then but nothing like that. There’s some bands that just reinvent, like Radiohead and Bon Iver. Radiohead is one that the more time that goes on, the more I understand their language, and how their language has evolved. When I started listening to jazz, I started listening to a lot of Bill Evans and Wes Montgomery. I didn’t like it and I didn’t enjoy it at first. And one of the points when things started to click with that was when I started slowing them down and had this amazing “slow downer” software that would slow things down without altering the pitch. I slowed it down to 50% and all of a sudden it sounded like the most amazing jam I’d ever heard, and I was like “I get it now, these guys are just wizards.”
Scroll to read more Music News articles
Join the Cleveland Scene Press Club