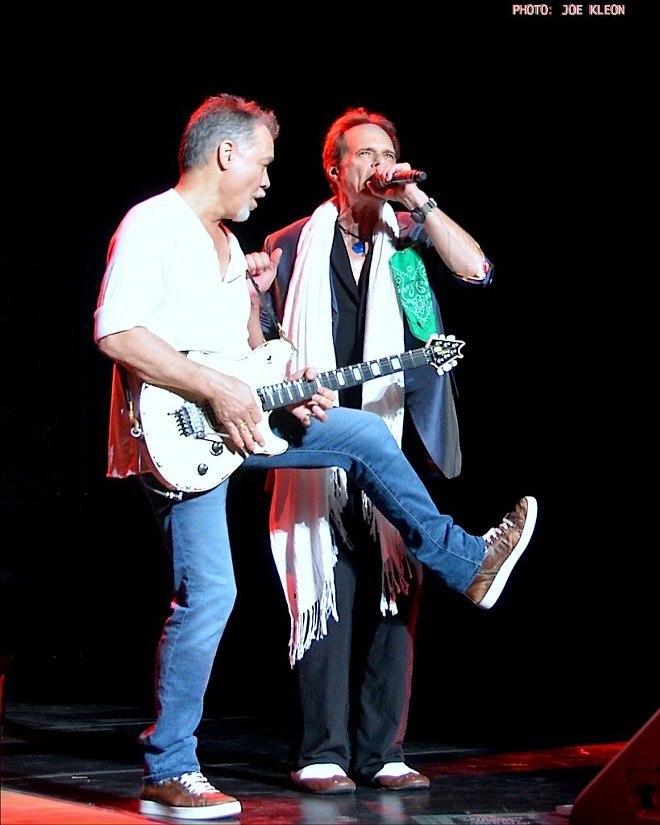 Joe Kleon
Van Halen performing at Blossom in 2015.
As you can imagine, the Rock Hall has a number of items from the late Eddie Van Halen, who passed away yesterday. The Van Halen guitarist was inducted into the Rock Hall in 2007.

The Rock Hall supplied us with the following descriptions of his gear that's currently on display.

Outside of the Garage, the Rock Hall has Van Halen’s 1994 Peavey EVH Wolfgang Prototype, his second collaboration with a guitar manufacturer to produce a signature instrument. Made by noted luthier Jim DeCola, the prototype predates the production model by two years, and Van Halen used it to record at his 5150 Studios.

Named after Van Halen’s son, the Wolfgang was manufactured in two stock models and could be custom-ordered.

On Level O at the Rock Hall, you can see a 2012 Wolfgang/Eruption guitar. It features a basswood body with carved maple top, a quarter sawn maple neck with ebony fingerboard. It features a hand-sprayed “rattlecan” white finish with black stripes, two humbuckers with volume and tone controls, a pickup selector and momentary kill switch. The 2012 EVH Wolfgang was custom-made for Van Halen by Chip Ellis for the band's 2012 Japanese tour and live album.  Although this Wolfgang is Van Halen’s modern/current design, the finish is a throw-back to the Eruption guitar graphic and was sprayed in the same fashion as the original was sprayed back in 1978 – outdoors on Van Halen’s property using lacquer “rattlecans.”

On Level 6, you can see Van Halen’s massive rig. A self-taught guitarist, Van Halen “created a new vocabulary on his instrument through an array of jaw-dropping, never-before-heard, innovative playing techniques such as two-handed tapping, in which both hands sound the strings from the fingerboard, which allowed him to produce fluid phrases at dizzying speeds,” as it's put in the description that accompanies the display

His use of “dive bombing,” depressing and releasing the vibrato bar to "create dramatic descents and ascents in pitch, drove innovations in guitar design such as the locking vibrato system and ushered in new standards in virtuosic rock guitar performance."

The Rock Hall display features a reconstruction of his rig as it appeared onstage in 2012 in North America and 2013 in Australia, Japan and North America. It includes amplifier speaker cabinets, tube-powered amplifiers (heads) and effects units. He used the pedal board from the late '90s into the early 2000s, and the sixth floor display includes a replica of the 1978 White with Black Stripe “Super Strat” that Van Halen conceived and built himself. In addition, there’s a replica of Van Halen's '79 “Bumblebee” Black with Yellow Stripe “Super Strat” guitar that he intended to be the second generation and improved version of the 1978 White with Black Stripe Stratocaster.

“While it never quite lived up to his expectations, and frustrated Van Halen in the process,” reads the Rock Hall’s description of the Bumbleee, “it did spawn one of Eddie’s most adored stripe color themes of black with yellow stripes.”

The exhibit even includes a replica of Frankenstein, Van Halen’s most famous and well-known guitar.

Van Halen discusses his rig and his unique approach to playing guitar in a videotaped interview that shows just what a musical genius he was.