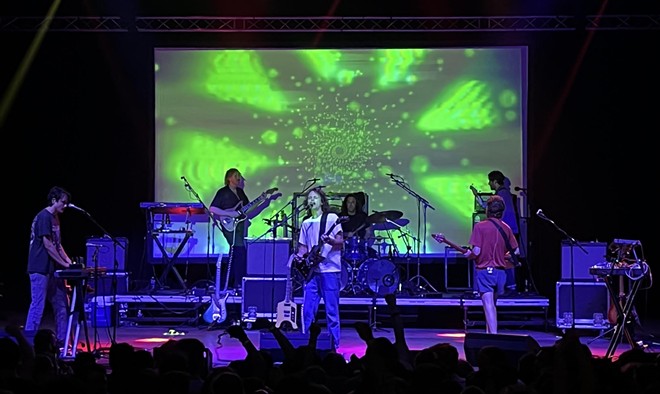 As King Gizzard & The Lizard Wizard neared the end of its sold-out show in Cleveland Friday, keyboardist and vocalist Ambrose Kenny-Smith did something a bit unexpected.

Making his way through the verses of “The Grim Reaper,” he and the rest of the Australian septet couldn’t have been further away from the chugging heavy metal with which it started its show. By that point even lead singer/guitarist Stu Mackenzie had put down his axe so he could blow some snake-charming melodies on his flute.

"Thank you,” Kenny-Smith gratefully told an adoring crowd at The Agora after the song. "We are officially a hop hop band. Rock and roll is dead.”

If it were true, most in the audience wouldn’t have been surprised.

King Gizzard & The Lizard Wizard has cultivated one of the rabid fanbases in indie rock through that kind of whiplash, as well as a prolific output and touring schedule since its formation in Melbourne in 2010. The group has visited Cleveland several times over the past decade, with the last being a show at The Beachland Ballroom in 2017. Since then, it has released 11 albums, not counting various live and miscellaneous releases.

It’s a pace that rivals John Dwyer of Osees, Ty Segall and the legendary Dayton band Guided by Voices and its lead singer Robert Pollard. King Gizzard & The Lizard Wizard has done enough for anyone to fall down an internet rabbit hole, something I found myself doing before, during and after Friday’s 100-minute show.

As for the concert, it was aggressive, trippy, jammy and indulgent, just like the band’s overstuffed catalog.

Playing in front of a screen projecting a psychedelic backdrop, the group started with the progressive rock and heavy metal of “Crumbling Castle” and “Planet B,” immediately whipping up the overflowing crowd on the floor.

The band turned toward the groovy with “Her And I (Slow Jam 2)” and subsequently moved through Eastern-style melodies, soul-infused jams and 60s psychedelia as its set wore on. There was a lengthy drum solo, many guitar odysseys and, yes, time for Mackenzie to feature his flute chops.

One minute they sounded like Megadeth playing underwater, the next saw Kenny-Smith was wailing on a harmonica. The crowd, and this reviewer, ate it up.

(I should note that while I’m a fan, I am not even close to being in the leagues of most in attendance. The merch table had a line stretching into the lobby, up the staircase to the balcony level and down another staircase leading back to the lobby. More than once, a fan in my section grabbed his friends, expressing disbelief that the band was playing a song he never thought he’d hear in concert.)

Yet for all of the show’s zig zags, the band’s set was only 11 songs. Closing with the nearly 20 minute lead-off track “The Dripping Tap” from this year’s double album “Omnium Gatherum,” Mackenzie steered the band through the many movements before the group finally crashed into the song's power-pop finale.

The crowd exploded and the band said its goodbyes. The house lights came on after about a minute.

The group, with the dozens of releases it had put out over the past dozen years, had again done something unexpected. It left the crowd wanting more.

5. Her and I (Slow Jam 2) (with Presumptuous and Iron Lung snippets)

8 Sea of Trees (with Head On/Pill and Shanghai teases)