Kraftwerk Let the Robots Have Fun at Connor Palace Concert 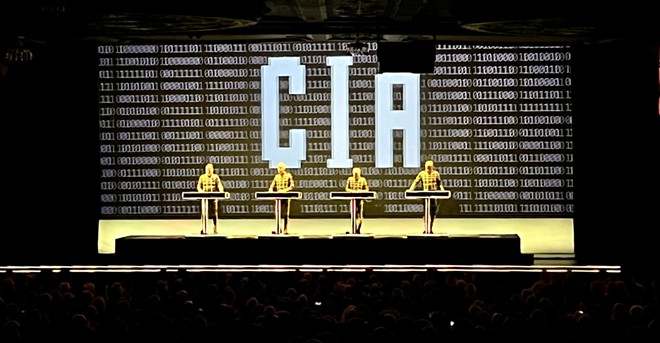 Photo by Eric Heisig
The loosest moment during Kraftwerk’s show Sunday night at the Connor Palace came when the band let the robots take over and dance.

After a set filled with one classic after another, the influential German electronic pioneers left the stage, almost as if saying that they reached the limits of human performance. It was time to let technology do its work.

From there came the most outlandish, upbeat and, strangely, most overtly human stretch of the night. “The Robots” appeared to get down to their own dance song, complete with strobe lights and silhouettes to showcase the sweet moves of the quartet of machines.

Perhaps that sounds like a criticism of the four humans, who then returned for a three-song encore. Far from it. Sunday’s two-hour, greatest-hit show put on display the wide range of electronic music Kraftwerk has released since forming more than a half-century ago. Technological advances allowed the band to (hopefully) present its music closer than ever to the way the members intended it to sound live.

It also let them occasionally become anonymous members of their own show, with the videos on the massive screen behind them doing the heavy performative lifting.

The band’s appearance at Playhouse Square was part of its “3D Tour.” Fresh off its 2021 induction into the Rock and Roll Hall of Fame, the show was its first in Cleveland since 1981, according to several fan-maintained online databases. In those 41 years, several members have come, gone or passed away, and all that remains from the classic era is keyboardist/vocalist Ralf Hütter.

The core of the band’s sound and message, however, haven’t changed during that time, even if the technology has (as evidenced by the 3D screen behind the band, enhanced by the glasses ushers handed concertgoers before entering the lobby). And what Kraftwerk presented was a nostalgia-heavy set for a crowd that likely hadn’t heard many of those hits live.

The music, brought to life by band members as they tinkered with the knobs and gadgets on their respective podiums, was replete with robotic vocals, thundering beats and glistening keyboards. The videos and graphics were straight out of 1985.

But to solely focus on nostalgia would be a mistake. After all, Sunday’s show was more hi-fi than anything Kraftwerk could have done during its heyday in the 1970s and 1980s. That clarity allowed the emotions, political messages, societal commentary and just plain fun to shine through.

The show ended with each member bowing before they exited, one by one. Hütter was last, gratefully taking in the applause before giving a quick “auf wiedersehen” and heading offstage.

It was a rare moment where he stepped into the spotlight, something he was mostly content to let the machines do for him.