The L.A. Band 'Talkback' That Shit All Over Cleveland Has Some More Things To Say 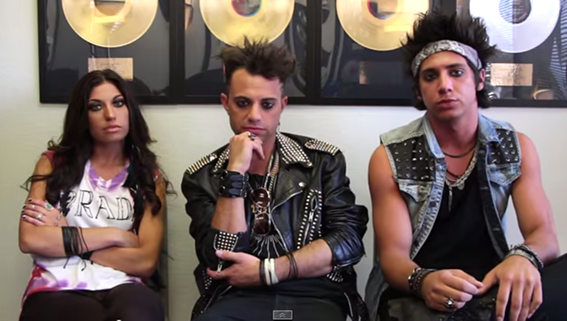 Talkback: We eat Clevelanders for breakfast.
Update: In case you were wondering where L.A.-based trio Talkback gets its name, look no further than this post, recently published to the band's official Facebook page. Members and siblings Bri, Matt, and Justin Geraci, who originally hail from Cleveland, have a few things to say about Scene and our article which made the rounds on social media a few weeks back.

The USA... 5,000 miles top to bottom, side to side... Little scene magazine illegally posts a private email between two...

A Cleveland guitarist was recently invited to join the L.A.-based band Talkback, but decided to politely decline the offer. He awoke this morning to find this gem in his inbox:


Thanks for getting back to me. No worries and I wish you the best in the Cleveland music scene! It's funny because only in Cleveland do people pass up a pop project lol. Im in LA right now and I have multi million dollar film producers/directors doing a music video for me all for free bc that's how much they believe in my music. I've also had Lady Gaga's producer invest about $300,000.00 into my brothers and I in the last 3 years haha. I know money doesn't mean anything to people in Cleveland but it sure says a lot when some stranger I barely know is investing their own money from their pocket into my project. Almost every guy I've contacted about playing with me IN CLEVELAND has passed it up bc it's "not their scene". Who do you Cleveland musicians think u are? Slash? Haha.. It's just funny to me. I lived out in LA for 6 years and I am from Cleveland and it's amazing to me the attitudes and cockiness that Cleveland musicians have when it comes to "their genre". Cleveland needs to get over themselves and realize there is a million other markets out there. You guys think you are so open minded and "cool" But you guys are the most close minded fools I've ever met. It doesn't make you "cooler" bc you will only play metal and hard rock. It makes you stuck in Cleveland forever ending up playing at your local bar until your about 55 years old. But hey, whatever floats your boat:) It's harder to write a pop song then it is to write a metal song. U feel me? Im in LA right now and I think I may stay here forever bc I cannot stand the Cleveland music scene with all their rebellious "stand up for Cleveland music scene. Rock on" bullshit. Haha. Thanks anyways and take care
You too Matt Augusta... I've never even met you before but from your texts I can tell you are the most cocky dude in Cleveland -have fun playing the worst songs ever- Take care - oh - and thanks for referring me to another Cleveland rocker haha
Bri Geraci of Talkback

For giggles, here's one of Talkback's music videos:

Alaina Nutile is the Web Editor who oversees all digital content and social media initiatives for Cleveland Scene Magazine and Detroit Metro Times. Before joining the staff in June 2013, she interned at Business Insider in New York City, and at La Hora in Quito, Ecuador. Alaina is a graduate of Kalamazoo College...
Read More about Alaina Nutile
Scroll to read more Music News articles