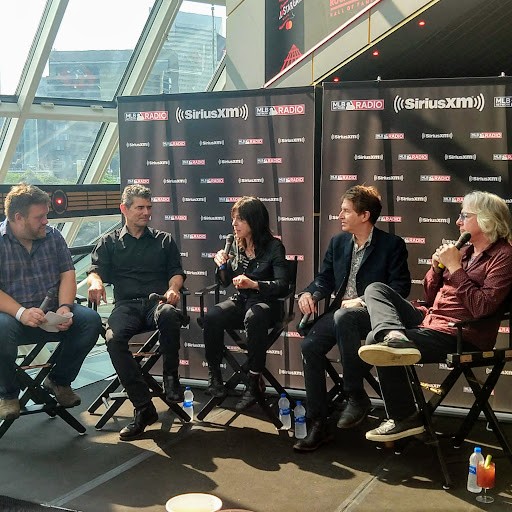 Earlier today, members of the indie rock band the Baseball Project participated in a media brunch at the Rock Hall to talk about their group and their participation in All-Star Game festivities.

The band played on Saturday night at the Happy Dog and again yesterday afternoon at the Rock Hall. The group plays free shows at the Rock Hall again at 1 and 3 p.m. today and tomorrow.

Singer-guitarist Steve Wynn, a former sportswriter before music “derailed” his career, talked about how the Baseball Project began the night before the Hall of Fame ceremony the year R.E.M. was inducted. At a party in New York, Wynn took advantage of the open bar. Singer-guitarist Scott Lewis McCaughey and Wynn hung out, and in talking about music and baseball, realized they could do a record of nothing but songs about baseball.

“We started writing like crazy at that point,” he said. “The Rock Hall directly led to this band existing.”

“Music and baseball are both really powerful in our lives,” said Rock Hall CEO and President Greg Harris. “I should add that Hall of Fame frowns upon performance enhancing drugs, but you need focus to do either for 10 or 15 years. There are special people that can do that.”

"We don't just write about a player on a surface level; we dig really deep," said Wynn, who added that the band is about to begin work on its fourth album. "We really care about these things, and many of the stories are really heartbreaking. These men lend themselves to great songs. They're just universal stories."