The National Academy of Recording Arts and Sciences, the parent organization of the Grammys, has announced the elimination of the polka Grammy, first presented in 1986. 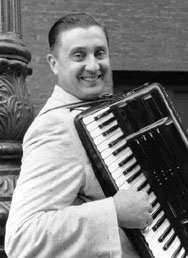 By the time the Grammys got around to honoring the ebullient dance music based on Eastern European folk tunes, it was already past its peak. It gained popularity in the early 20th century and swept the country in the years following World War II, when Cleveland’s Frankie Yankovic (pictured), the award’s first winner, was the genre’s superstar, with two million-selling hits in the ’40s, national TV appearances and constant tours. He died in 1998 and was buried here at Calvary Cemetery, following a service/celebration at St. Mary’s Church in Collinwood than concluded with a polka jam session on the sidewalk outside the church.

Unfortunately, in recent years, the number of eligible entrants had become so small that the category wasn’t competitive, and the award almost always went to slick, Vegas-style crossover artist Jimmy Sturr (the only man consistently more tan than Ohio congressman John Boehner). Sturr who won 18 out of the 24 times the award was presented.

There’s sure to be some indignant discussion of this move this weekend at the 21st annual Northeast Ohio Polk Fest, taking place at the Old Firehouse Winery (5499 Lake Rd., Geneva-on-the-Lake, 440.466.9300). Here polka will be alive and kicking from noon to midnight tomorrow and Sunday, with nonstop music by the Casuals, the Ray Zalikar Band, the Del Sinchak Band, Ron Sluga, the Hobos and the Don Wojtila Band on Saturday, and the Larry Placek Combo, the Western Pennsylvania Button Box Group, the Joe Grkman Band and Jonah Koslen (?!) on Sunday. Will Koslen, the original guitarist for the Michael Stanley Band, whip out an accordion and play a polka version of “Strike Up the Band”? Stay tuned! Ethnic food will be available to keep the dancers fueled. The $6 admission is good for both days. Children under 12 are free. — Anastasia Pantsios