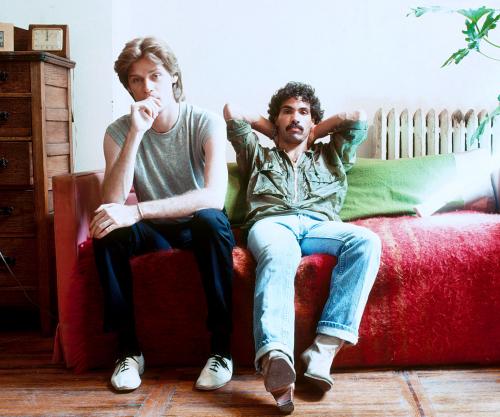 You don’t need a degree in musicology to know that Daryl Hall and John Oates grew up listening to lots of Philly soul. The sound penetrates the music found on the duo’s comprehensive new four-disc box, Do What You Want, Be Who Are You, which will be released next week. The compilation stretches back to their pre-Hall & Oates days and includes one song from Oates’ Masters and two from Halls’ Temptones. It also features all of the duo's hits, live material from a 1975 London show and a new 60-page color booklet with photos and testimonials from celebrity fans like Fall Out Boy’s Patrick Stump and Death Cab for Cutie’s Ben Gibbard. In separate interviews, Hall and Oates talked about the box and the 40 years they’ve spent together. —Jeff Niesel

You guys prefer to do your interviews separately. What’s the reason for that? You still get along with each other, don’t you?
Hall: Um, I think we communicate with the world better separately.
Oates: It’s just easier to talk and not step on each other — especially in phone interviews.

Do What You Want, Be Who You Are is an extensive collection of tunes that starts with songs from the Temptones and the Masters. What strikes you about listening to those early songs? Can you hear the makings of what would become Daryl Hall and John Oates?
Hall: Absolutely. When you listen to either one of those songs, either mine or John’s, you really hear it all right there. It’s really R&B. We’re just teenagers. The melodies are there, and the chords are there.
Oates: You hear a lot of things. You hear youth, you hear exuberance, you hear excitement. You hear inexperience. It’s like looking at a photo album of your family and seeing photos of when you were a kid. What strikes me in the early stuff is that we were fortunate enough to grow up in a time when the music industry allows you to make creative mistakes, which is the antithesis of what’s happening today. If you take our first three albums, which are Whole Oates, which is an acoustic, singer-songwriter album, Abandoned Luncheonette, which is acoustic and R&B combined, and War Babies, which is an experimental rock album, and look at the very different styles, you see what ended up happening was a synthesis of those three styles. Had we not been able to do that, we may have never succeeded.

Disc One also includes a handful of tunes from a 1975 show in London. Was that a particularly good concert?
Hall: When you’re dealing with early documents and things, that was one that we happened to have. What’s great is that that band was consistent. Other than the band I have today, that was the best band we’ve ever had, and I didn’t realize it at the time. I overlooked the abilities those guys had. When I go back and listen to those tracks, it blows me away. The guitar playing of Todd Sharp is incredible. I can see why they liked us in England. We were hot.
Oates: The thing I remember most about that concert was jetlag. We did it the day after we arrived. I had to slap myself to stay awake. The band was great. I think because we were so tired and out of whack, it was like we were playing unconsciously. The band was on fire that night. The audience was enthusiastic. At the time, we were an underground, hip cult band. You have to take it in that context. We were the darlings of the underground London scene.

You’ve described the ’70s as a “learning process.” What did you learn during that era?
Hall: I think we learned what our limits were. I was forced to listen to all these songs, something I don’t normally do. But I’m glad I did. It gives me an overview I never had. I can see these guys came from a regional background. We entered the world from that perspective. You can hear us interacting with all the different experiences, whether it’s New York City or our European experiences and our days in California. It shows how we evolved into these seekers of sounds. We were putting Philadelphia against country music or against what they used to call prog rock or the California sound of the ’70s. We were trying to stretch our songs and see what worked and didn’t work. We learned as much from our failures as we did from our successes. It’s an incredible journey.
Oates: We learned a lot of things. We figured out what we wanted to do. If anything happened in the ’70s, that’s the most important thing. That led us to the ’80s. We realized we functioned best when left to our own devices. We realized we didn’t want to be recording in L.A. We realized we wanted to record with our band and not studio musicians. We banked all that information and in the ’80s it all came together.

Voices became a huge hit. What contributed to its success?
Hall: I think two things. To be simplistic, one is that the world came to us. Whatever we were doing suddenly became the sound they wanted to hear. Number two is that we threw out all the outsiders and produced it ourselves with our band. It’s our first true solo production.
Oates: The two albums we made before Voices were Along the Red Ledge, which is one of my favorites, by the way, and X-Static. We made those albums with David Foster. Everyone knows him as a mega producer but before that he had never produced an album. We were his first artist. I remember when we were making X-Static, he said, “Why am I here? You guys are just making this album yourselves.” That’s when the light bulb went off and we decided that’s what we’d do in the future.