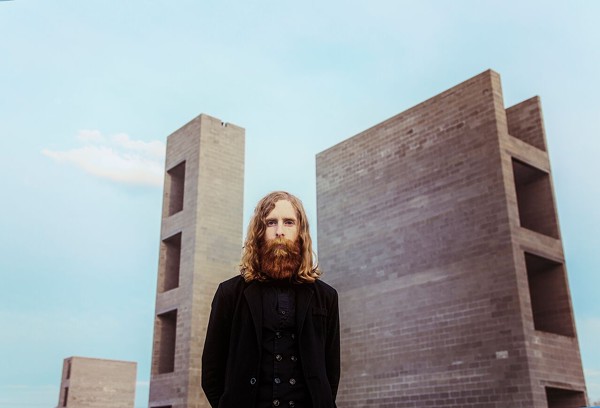 Olga Pavloska
Multi-instrumentalist Zac Little, who leads the Columbus-based indie rock act Saintseneca, grew up on a farm in Noble County, Ohio. But his childhood wasn’t that atypical. He took up skateboarding as a teenager and began to listen to punk bands. At about that same time, he also started listening to the Beatles, and that group would have a transformative influence on him.

“Skateboarding was my introduction to art in some ways,” he says via phone from his Columbus home. Saintseneca performs with Trace Mountains at 8 p.m. on Tuesday, Oct. 9, at Mahall's in Lakewood. “Ed Templeton ran a weird artsy skateboarding company, and I got into punk and stuff through that. There wasn’t a punk scene, but when I was maybe 15 or so, there was another kid who was a senior. He played bass, and I looked up to him. He turned me onto the Beatles. He played in the first band that I formed in high school with some of the same people who would later form Saintseneca.”

After experimenting with various rock acts, Little would form Saintseneca, a group he describes as “almost a bluegrass band,” in 2007.

“I had been playing in rock band in high school with electric guitars and drums, but when we moved to Columbus, we no longer had a place to practice loud music,” he says. “For a while, I had tried unsuccessfully to incorporate folk instrumentation into our rock music, so it was a natural thing to adopt that instrumentation.”

The group’s latest effort, Pillar of Na, features plenty of folk instrumentation as songs such as the twangy opener "Circle Hymn" and "Ladder to the Sun" have a Decemberists-like feel to them. The album also references the Genesis story of Lot's wife who looks back at a burning Sodom after God instructs her not to. She looks back, and God turns her into a pillar of salt.

Little, who took up preaching when he was a teenager, says he’s not sure exactly when he knew that the biblical story would inform the album.

“The album took different twists and turns when we were working on it,” he says. “The overarching idea is about memory and trying to look back into the past and reconcile that with where you are in the present. And it’s about the impossibility of doing that. It’s also a way of situating yourself and orienting yourself to make sense of the world and your life. I like that metaphor of that particular story. You have this story about this woman who tries to look back and is punished. I was always frightened by that story. How could you not look back. It’s rather forboding.”

Little says he originally thought he’d self-produce the disc. But the more he thought about it, the more he realized he wanted to work again in Omaha with producer Mike Mogis (Bright Eyes).

Once in Omaha, the group worked quickly and tracked the record in only a couple of days, recording the songs live and then tweaking some of the backing vocals and other nuances. As a result, the songs are particularly well-suited to live performances.

“The album has become the easiest and most literal interpretation of our past few records because we did so much of that work ahead of time," says Little. "On this one, I wanted to be as minimal as possible. I wanted there to be space and room. We figured out what we wanted in the song first, so it’s been easy to play the songs live. There are a few little things we needed to figure out, but it’s more literal than the last few records.”