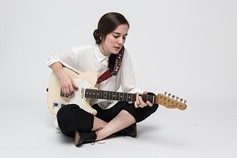 New York-based singer-songwriter Margaret Glaspy is proof that you can make a great sounding album with nothing more than a laptop. She recorded her first EP, 2012’s Homeschool, at her Brooklyn apartment. The tender songs show off her fluttering vocals and poetic sensibilities, setting the stage for terrific full-length debut, last year’s Emotions and Math.

“I taught myself how to record music on my own,” says Glaspy via phone from Northern California, where she was visiting friends and family over the holidays. She performs at on Jan. 15 at the Beachland Tavern. “That very first record was the first time I ever released anything but it was monumental for me in my own way. I liked making music at home and making demos and that’s what that first EP is.”

Born in Sacramento, Glaspy grew up in Red Bluff, a small town between Redding and Chico. Family members introduced her to a variety of music.

“My siblings and mom and dad were both big music fans,” she says. “I had a lot of records growing up. I was a big Michael Jackson and Joni Mitchell and James Taylor fan. Those are records I got from my parents. My siblings were fans of music that was popular at the time. They had good taste. They were listening to No Doubt and Weezer and Lauryn Hill. My brother was a big rock ’n’ roll fan. He had Deftones, NOFX and Rage Against the Machine and liked bands like Led Zeppelin and the Rolling Stones too. Music was a priority for all of us. That trickled down to me. Elliott Smith was a huge influence; I got his records from my brother.”

Glaspy found her way to the East Coast in a rather roundabout manner. She moved to Boston in 2007, where she attended Berklee College of Music for a spell and then moved to New York to pursue her musical pursuits.

“I was in Berklee very briefly and kept writing songs and was learning how to play the guitar,” she says. “It was a natural progression to want to live in a bigger city where the standards were higher. I craved to be in New York for sure.”

She’d been living in New York for nearly six years and “just playing locally like crazy” when the folks at ATO caught wind of her. She signed with the label, home to acclaimed acts such as Alabama Shakes, My Morning Jacket and Benjamin Booker, and began to assemble the tunes for Emotions and Math.

“There are a few songs I had held on to a very long time like ‘No Matter Who’ and ‘Anthony,’” she says. “Those are six or seven years old. The rest of them I wrote closer to the release. There were some songs that I decided wouldn’t go on the record until I had a proper release because I knew they were good, and I wanted to wait. I started to demo things more and more and got really into that process. That was right around when ATO got in touch. My process had changed. To me, there’s a different sound for the older songs. ‘No Matter Who’ or ‘Anthony’ — those are nostalgic for soul music or Motown. The ones that were closer to release were inspired by Elliott Smith since I was listening to so much of his music and soaking in that music. The album’s more compartmentalized but works as a whole even though it’s different inspirations from different times.”

Glaspy embraces a “grungy, raw aesthetic” on the album’s title track, a mid-tempo pop/rock tune that puts her woozy voice up front. “You and I” features a chunk-y guitar riff and raspy vocals as Glaspy sneers, “you and I have been a mistake/I’ve let it linger too long.” The album benefits from some sophisticated production that helps gives the songs sonic depth. A touch of organ gives “No Matter Who” a real rootsy, vintage feel and “Pins and Needles” features squealing electric guitars that compliment Glaspy’s half-spoken vocals.

“We were at a historical venue in Hell’s Kitchen; Sonic Youth and Yoko Ono and a bunch of bands have recorded there,” she says of the studio experience. “It’s more of a jazz studio now, but monumental rock bands and avant-garde stuff has been recorded them. I just liked the room a lot. We did it quickly. It was three days with the band and then one 12-hour day for vocals.”

Glaspy’s upper-register vocals have a distinctive, almost jazz-y feel to them. That’s something she says has evolved over the years.

“When I was a little girl, I would yell when I sang,” she says. “I didn’t have that much control over my voice. As I’ve gotten older, it’s about understanding subtlety and dynamics and knowing how to be silent and also understand where things need to go and when things need to happen. I’m keen on staying in shape vocally. I’ve never had proper lessons. I’m thinking about getting vocals lessons more regularly. I think you can never stop learning. I have a ways to go. I want to learn how to get quieter."

As far as the song’s meanings go, Glaspy likes to leave that up to the listener.

“I don’t like to talk about the song meanings, but I think ‘emotions and math’ is a good title track for the record,” she says. “Those words fully encompass everything. My brain works on that level. I learned that about myself while making the record. It’s not all analytical or all emotional. It’s a mixture of both.”