Singer-Guitarist Samantha Fish Gets 'Personal' on Her New Album 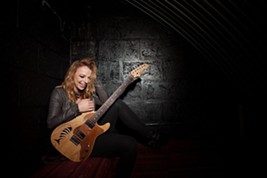 Miss Jill PR
When she was still in her teens, singer-guitarist Samantha Fish started hanging out at the Kansas City blues club Knuckleheads. While there, she met many of the big-name blues acts when they came to town.

“Seeing people at Knuckleheads inspired me,” she says via phone from her Kansas City home. “[Blues singer-guitarist] Popa Chubby was the first show I ever saw. I was blown away. He’s a rock star and making a living touring. It’s not such a shot in the dark. For me, I woke up and realized it’s something you have to work for. It’s not impossible. When I told my parents and everybody that I wanted to become a musician, it scared the hell out of them. They always said I should go to school. Growing up, you always think it’s impossible.”

But the “impossible” would soon become the possible. Fish, who initially played drums, made the switch to guitar and never looked back after establishing herself as a formidable blues player.

“This desire to sing and play and be a front person was there even though I was a shy kid,” she explains. “I would have never in a million years picked this for me, even though there was a part of me that always wanted that. I started on drums because I thought drums were really cool, but I really connected with the guitar and singing. It helped me come out of my shell when I was younger. Playing music helped me bridge that gap and become a little more outgoing. It let me become me.”

With her new album, Wild Heart, she emphasizes roots rock over the blues for which she’s known. It’s a terrific effort that benefited from collaboration with songwriter Jim McCormick and producer Luther Dickinson of North Mississippi All-Stars fame. Dickinson also played the various stringed instruments (guitar, bass, mandolin, lap steel) on it, recording the album at Royal Studios and Ardent Studios in Memphis, Tennessee, at Zebra Ranch in Coldwater, Mississippi, and at Blade Studios in Shreveport, Louisiana.

“For me, it was the third studio solo release and it was the first time I was like, ‘I’m not going to worry if this fits within what we’ve been doing and what everybody thinks we should be doing,’” she says. “It came out really naturally. We didn’t mind the genres so much. It was more personal. Anytime you do something that’s more personal and it’s received well, that’s a success.”

Prior to recording the album, she had had several songs that were mostly finished or half-finished. Her manager wanted her to try co-writing and see how she liked it. She took a few song ideas, maybe a song or chorus, and connected with McCormick in Nashville, a guy who’s written some “huge contemporary country hits.”

“He’s a word doctor and a lyricist,” she says. “We just really clicked. Getting another perspective with somebody who just focuses and works on that alone, I learned a lot. We came up with some good stories. The ideas were there and we developed the stories. I grew up on guys like Tom Waits. I like imagery more than storytelling, but I think a good story connects with people. I went to Nashville for a few days. We met up a few times and worked in person. That was cool. He has an office on Music Row. Getting to go out there and write in that historic place was pretty cool in and of itself.”

Fish says she’s been a fan of Dickinson for a long time. In particular, she cites the North Mississippi Allstars’ album World Boogie is Coming as an inspiration.

“I thought it sounded so good,” she says. “The quality of the recording was great. It had all the great tonal qualities I would want in an album. It sounded so full. I’ve been a fan of his guitar playing. He’s such a big figure in our industry. He works with all these people and puts out so many great albums. I threw his name out there. A few weeks later, they reached out and he was interested. It was a shot in the dark. I thought that was pretty cool. Luther had set it up [that we could record at multiple studios]. It turned out really cool. It was like a pilgrimage. We’re so lucky it came together the way it did. Everyone gelled well. It could have gone really wrong. It could have gone really badly if we didn’t work with one guy. But Luther put together a great team of people. When we went to Memphis and worked with the Norman Sisters. He just picked the right people for the project. He just knew who would be a good fit.”

The opening tune, “Road Runner,” a song about a man who loves and leaves women, comes off as particularly gritty as Fish unleashes fierce solo after fierce solo.

“That’s based on a couple of different people to be honest,” she says. “I try not to incriminate anyone. Nobody tells you the hardships of being a songwriter. I’ve got my dad taking things personally. My mom is pissed. It’s rough. My fiancé is pissed at me all the time. He thinks I write horrible songs about him. They’re not about him. They’re just stories.”

A pretty ballad that features acoustic guitar, “Go Home” allows Fish to show her softer side as she sings about wanting to overcome “nights of heartache.” Sisters Risse Norman and Shontelle Norman-Beatty provide the cooing vocals in the background.

“That’s a song about watching a few friends go through some bad stuff,” she says. “Overall, it’s a song about being a hypocrite and not practicing what you preach. It’s about not having all the answers and not following through. I think we can all relate to being a bit of a hypocrite.”

The popularity of the blues seems to come in spurts, but Fish says the genre currently sits “in a good place.”

“It depends on the fans and the industry letting it grow and evolve,” she says. “For me, I felt like I had to fit within a certain category or box to be accepted. I feel like you have to get away from that a little bit. There has to be some exploration and making it your own and that’s what has to happen for it to take off and for young people to get involved.”