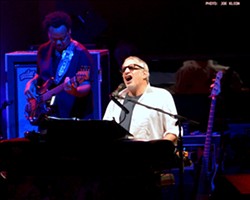 Joe Kleon
Steely Dan’s Walter Becker and Donald Fagen aren’t the most animated performers. But with a stellar backing band anchored by hard-hitting drummer Keith Carlock, they didn’t need to be as they delivered a solid two-hour set last night at Blossom. Between Becker’s stream-of-consciousness banter with the audience of about 10,000 and Fagen’s sophisticated lounge singer approach, the two came off as a couple of characters whose opposites-attract personalities meshed perfectly. That shouldn’t really come as a surprise. As Becker said one point in the show, the guys have been playing together for close to 50 years. See a slideshow of photos from the concert here.

The set started with a jazzy intro; a four-man horn section wailed away before Becker and Fagen, accompanied by three female backing singers, sauntered onto the stage and wasted no time in turning to the classics. “Aja” featured some aggressive interplay between the sax and drums, and Becker punctuated “Hey Nineteen” with some mid-song spoken word that eventually connected his story to the song’s lyrical reference to Cuervo Gold. “We’re gonna make a groove, rock ’em and sock ’em, then have a moment, and rock ’em and sock ’em again,” he said, providing an apt description of the concert.

Fagen’s voice sounded a bit thin on “Black Friday,” which he delivered while sitting underneath an ominous red spotlight, but the band recovered nicely as a staccato drum riff and some perky horns propelled a feisty rendition of “Show Biz Kids.” Fagen sounded particularly soulful on “Time out of Mind,” which he wrapped up with a “yeah baby” at the song’s conclusion and “Bodhisattva” benefitted from a snarling guitar riff that Becker laid down. Becker took over lead vocals for one of the concert’s least memorable tunes, but the group returned to form with “Babylon Sisters,” a song that found Fagen in sync with the backing singers as he belted out the refrain “Babylon sisters shake it.” The guys saved the best for last and turned out exuberant renditions of “Josie,” “My Old School” and “Reelin’ in the Years” before returning to play an encore that included a funky rendition of “Kid Charlemagne.”

Given that both Steely Dan and Elvis Costello are Rock and Roll Hall of Fame inductees, it didn’t seem fair that Elvis Costello & the Imposters were relegated to an hour-long opening set. Costello certainly could have used some more time but he made the most of what he had to work with, delivering a hit-laden set that included songs such as “(What’s So Funny About) Peace, Love and Understanding” and “(The Angels Wanna Wear) My Red Shoes.”