Taking a Look at the 2010 Rock Hall Nominees 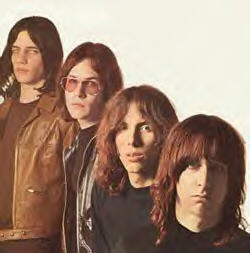 The thing that most people are ignoring is that a lot of these nominees suck.

Kiss? Please. They were a joke in the '70s, even before they made that awful TV movie.

Red Hot Chili Peppers? One-note fake-funksters with a singer who sounds like Kermit the Frog and a bass player who snaps away at the strings with little feel for rhythm.

I'll give them Genesis, but I'll never forgive the band for "Illegal Alien" (or many of the other clunkers they made when Phil Collins took over). Let's just hope the Peter Gabriel era weighs heavily on voters' consciences.

I'll also give them Abba, because "Dancing Queen" is one of the greatest songs of all time. But their albums are tough listens, even for hardcore fans of gay-sounding '70s pop.

LL Cool J made a couple good albums before turning into a rapping loverboy. But "I Need Love" is one of the all-time worst moments in hip-hop history. It ushered in a whole subset of shitty rap ballads that still clog the Top 40.

But I love the Stooges. So that's a cool move (though Iggy's solo career kinda sucks).

Other nominees include the Chantels (the girl group's "Maybe" is one of the all-time best, but what else have they done?), Jimmy Cliff (reggae guy who fueled the great Harder They Come soundtrack), the Hollies (annoying Brit poppers who gave the world Graham Nash), Darlene Love (guided by Phil Spector, she got lost after he stopped producing her records), Laura Nyro (hippie-era singer-songwriter better known for writing than singing) and Donna Summer (some great disco singles and the awesome Bad Girls album, but little else).

The nominees will be whittled down to the actual list of inductees in January.

So what do you think of this year's list? —Michael Gallucci