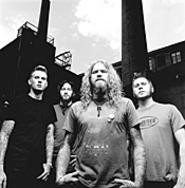 Mastodon is so metal, its drummer has an umlaut in his name.
Brent Hinds has put on some weight. His band, Mastodon, finished up a mega-budget, liquor-sponsored tour with Slayer and Killswitch Engage not too long ago. And apparently, the catering was too good to pass up.

Courting obesity was just one of the perks of being part of a big tour. Emerging from the metal underground, this Atlanta-based prog-metal quartet played for some of the biggest audiences of its career. But even the growing scale of its concerts hasn't diluted Mastodon's brutality and intensity. If anything, the foursome's energy and enthusiasm have increased. "The bigger the shows get," says Hinds, "the more fun."

The fun began in 1999, in the much humbler venue of Hinds' Georgia basement. Drummer Bränn Dailor and guitarist Bill Kelliher -- both formerly of Today Is the Day and Lethargy -- left their Rochester, New York home for the warmer climes of Atlanta. Just a few weeks later, they met two like-minded progressive metalheads, bassist-vocalist Troy Sanders and guitarist-vocalist Hinds, at a High on Fire show at Hind's house.

At the beginning of 2000, the four recorded a demo and began touring as Mastodon. A debut EP, Lifesblood, and the group's first full-length, Remission, hit in the second half of 2001, certifying the outfit as a technically skilled, anvil-heavy force to be reckoned with. Remission's single, "March of the Fire Ants," gained the band MTV2 airplay and a following in the metal mainstream.

While touring in support of Remission, Mastodon came up with the idea of mining one of the classics of American literature for heavy-metal inspiration. As unlikely as it might seem, the band's sophomore full-length, Leviathan, takes its direction from Moby Dick, Herman Melville's timeless story of one man's monomaniacal obsession with an elusive whale. While most of us skated through high school on the CliffsNotes version, Dailor made his way through the weighty tome during a 40-hour journey from Hawaii, where he'd just been married, to London, where his bandmates awaited him. Struck by Melville's description of the great whale as "the salt-sea Mastodon," Dailor thought it would be funny to shoplift the characters and themes of the masterpiece for a concept album.

"When he arrived," Hinds recalls, "he'd been drinking, and we'd been drinking, and he said, 'Oh, I got the best idea!'" Shortly thereafter, the band set to work writing the songs that would become Leviathan. A masterpiece was born, cementing Mastodon's place in the heavy-metal pantheon. But as any rocker will tell you, a concept album can be a dangerous thing, an excess of erudition and thematic focus that can easily let the air out of the tires of even the baddest monster truck. However, by approaching the subject matter loosely and creatively, taking plenty of poetic license with Melville's original material, and making fierce, muscular rock the first priority, Mastodon manages to sidestep the tar pit of pretension.

"Some of the lyrics are verbatim," Hinds explains, "while others are metaphorically addressing the novel."

It also helps that the band maintains a sense of humor amid the drama. The album's cinematic instrumental closer is called "Joseph Merrick," after the 19th-century sideshow freak known as the Elephant Man. With its grand vision, musical breadth, and lyrical complexity, Leviathan sounds more like a fourth or fifth album than a second. Though most of the record's 10 tracks are well under the five-minute mark, each manages to pack in more molar-rattling riffs and erratic mood swings than the entirety of St. Anger. Hinds and Kelliher squeeze out interwoven, technical fretwork, while Dailor's impossibly athletic drumming and Sanders' woofer-blowing bass drive the ever-changing compositions forward with furious intensity.

The 13-minute-plus "Hearts Alive" is the obvious showcase for Mastodon's impressive compositional and motor skills, but even the brief "I Am Ahab," which clocks in at under three minutes, spotlights a band whose stunning talent and vision never get in the way of a sincere, merciless ass-kicking. Contributions by Scott Kelly of Neurosis and Clutch's Neil Fallon add even more edgy fuel to the inferno. Every thrum of a guitar string and flutter of a drumstick rings through, thanks to the crystal-clear production of Minus the Bear's Matt Bayles, who has worked with artists from Pearl Jam to These Arms Are Snakes.

"He's one of my really dear friends," says Hinds of Bayles. "We explore a lot of options and spend hours working on sounds together." However, Bayles' willingness to work long hours to get just the right results did have its drawbacks. "He's a total drill sergeant," Hinds says. "Every note you hear on that record, I played over 50 times." Bayles' perfectionism has more than paid off, though, making Leviathan a nearly flawless, brawny paragon of technical metal.

That extreme artistic approach isn't strictly limited to music. When making the recently released video for "Iron Tusk," a song about harpooning the white whale, director Chad Rullman enlisted the help of Atlanta-based performance artists Psychotic Suspensions. In scenes ultimately censored by MTV2 for the video's September debut, the performers strategically thread metal hooks through their skin and are lifted into the air, serving as an unexpected and memorable visual analogy for the song's lyrics.

While Mastodon's artistic inspiration comes from the usual vintage suspects -- Metallica, Slayer, Venom, Budgie, and Iron Maiden -- Hinds admits that he and Sanders also find muses in much less predictable circles. "Me and Troy are completely infatuated with classic country music," he proudly proclaims before reeling off a laundry list of C&W legends from the '50s, '60s, and '70s. "I think I was born in the wrong decade."

In addition to his musical nostalgia, Hinds has a soft spot for old guitars. "I'd like Mastodon to become the biggest heavy-metal band in the world," he says matter-of-factly. "I'd like to make a really good living playing music and open a vintage-guitar shop."

Hinds' retirement into the world of retail, however, is likely to be a few years off. In the meantime, this Mastodon will just keep getting bigger.