The Magpies whip up a new CD with some old ingredients 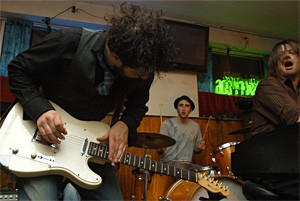 "Anyone see my pick?"

The Magpies' woozy, Americana-based swagger qualifies them as the local group most likely to know somebody in the Band. Like Bob Dylan's legendary backing combo from back in the day, the Magpies fuse blues, R&B, and folk into a plaintive, ramshackle heartland-rock blend.

Eastern Standard Time, the Magpies' debut album, marks a clean start for frontman Roger Hoover, who led the alt-country band the Whiskeyhounds for almost 10 years. Fans will spot some familiar roots-rock in his new group, but the sound is more expansive now, barely hinting at the Whiskeyhounds' countrified twang.

Cuts like "Tea Kettle" still ring with Hoover's chimey guitar, but everything is turned loose behind Justin Gorski's manic, Jerry Lee Lewis-style keyboard-pounding. "This whole album could be Justin going crazy on piano," says Hoover. "He can outplay just about anybody. But he's talented enough to know, 'I have to play this here and keep it simple.' But if he just needs to go hog wild, he will."

Meanwhile, the brokenhearted waltz "She Knows How" reels like Dylan's "You Ain't Goin' Nowhere," and Hoover lays down a crunchy rock riff in "Wyoming Quarters" as he muses, "Your freckles look like stars in the nighttime canvas of your skin/There was something that I wanted to say/Couldn't find the words until I watched you drive away."

Road-found women are a recurring theme on Eastern Standard Time, showing up in songs like the bluesy "Hotel Receipt." Yet the album opens with singer-songwriter Hoover's most unabashedly pop tune, "Picture Me in a Love Song," where the jangling chorus, whirling psych-spiked rhythm, and swirling organ washes chime like the Byrds.

While the Magpies didn't necessarily labor over the songs — Hoover says the band barely rehearses — they perform live a lot, honing tunes onstage to get a firsthand feel for what works and what doesn't. In fact, positive audience response to "Picture Me in a Love Song" encouraged Hoover to keep working on it. He was about to throw it away. Many songs earmarked for the record, in fact, didn't make it, because they simply didn't fit with the album's warm and cozy tone.

Hoover credits local producer Ryan Foltz for Eastern Standard Time's polish. "We're dragging along, tired of listening to the songs and doing take after take after take," he recalls. "But when it was finally done, and we got the master back, it's like, damn — I'm glad [Foltz] has such a picky ear."

Eastern Standard Time ranks as one of the best local releases of the year. And wouldn't you know it — the Magpies actually do know someone in the Band: drummer Levon Helm, whom they met a few years ago in Woodstock through a lawyer they share.

"When we met [Helm for] the first time, he said, 'Boys, any time you wanna come back here, just knock on the door,'" recalls Hoover. "We were all terrified, because it came down to a vote [when we got to his house], and of course I was the one that had to go knock on the door. He opened the door in his bathrobe and underwear, and said, 'Roger! Welcome back to Woodstock. Nice to see y'all again.'"

Now at the end of a monthlong tour, the Magpies are holding up well — even if national audiences aren't quite as enthusiastic as local ones. But, as Hoover points out, when the band isn't on the road, the guys aren't doing their job. There's only one way to reach more people: by playing small clubs in Arkansas, Oklahoma, Texas, and Missouri — all recent stops on the tour, which wraps up this weekend in Cleveland with a CD-release party at House of Blues.

"We get a little tired," admits Hoover. "Then we get to the show and see all these people who've paid to hear our music, and it lightens the mood. We have a good time. We get to hang out and tell some stories and say hi. That's what really keeps us going. That and the booze."