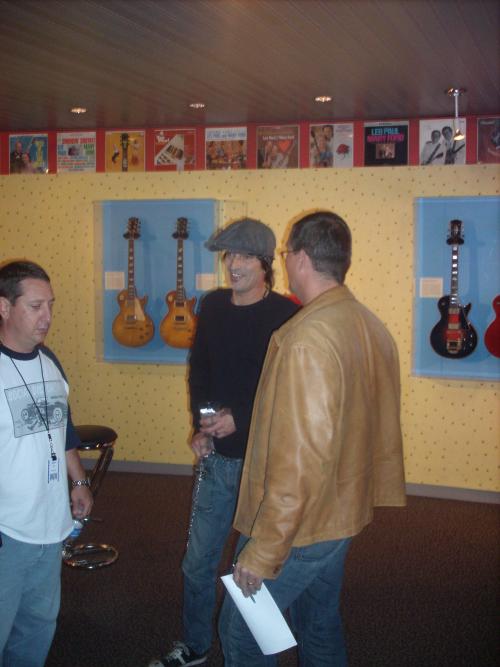 Showing no signs of wear after having flown to Cleveland on a red eye from Las Vegas (where he celebrated his 47th birthday, no less), Motley Crue drummer Tommy Lee stopped by the Rock and Roll Hall of Fame and Museum Saturday for a brief press conference before taking a tour of the exhibits.

In town to judge the Fortune Battle of the Corporate Bands, Lee got a kick out of the Les Paul experimental guitars hanging on the walls of the room where he was sequestered in front of a slew of news cameras. “That’s a fuckin’ door hinge,” he said while eyeballing “the plank,” a piece of board that Paul had rigged into a guitar.

Lee spoke briefly about the forthcoming Methods of Mayhem album that’s due in early 2010 and said that getting back together with Motley Crue has made band members realize they’re better off together than apart (duh!). “People tend to drift apart and other things become more important,” he said. “I think we had to walk away from each other to realize how important Motley Crue was. But there’s just some kind of magic when we all play together.”

He said he wasn’t sure of the status of the film version of The Dirt: Confessions of the World’s Most Notorious Rock Band, the best-selling Motley Crue bio, but he hinted that the band might take control of the project. “Who better to make that movie than Motley Crue?”

When asked about his influences, he gave a typical Tommy Lee response: “John Bonham, my father, Cheap Trick, Van Halen, AC/DC. I’m inspired by many things. Girls. That’s always a good one. I can get inspired by a trail of ants. I’m retarded too.” ’Nuff said. —Jeff Niesel