ERIC SANDY
Trey Anastasio tends to lean on intimacy in his live performances, whether he’s in full-band mode or rolling solo. He cultivates momentary connections with the audience—and with individual audience members—and in doing so reveals the essence of what makes his creative work so captivating after all these years. He cares, in a word. He’s here with us, too.

The guitarist from Phish stopped by the delightful Canton Palace Theatre last night to play just a dynamite set of songs and to tell stories about how he got here—and how we all got here. Most of the folks in the audience, I’d have to guess, have seen Trey perform these songs on stages all over the U.S., going back years, decades. There was a feeling of true community in the room, as there always is when Trey and his pals pick up their instruments and make cool things happen. 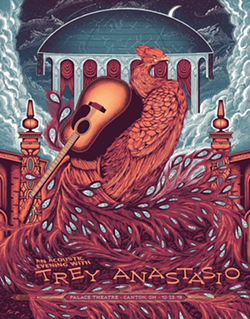 While last night’s setlist heavily favored Phish material, make no mistake: This was a solo outing from Trey himself, and he imparted a different, more nuanced emotion in a lot of these songs. He catered to the moment, as he’s been doing thus far on this tour. Not only did he need to restructure some of these songs for the acoustic guitar (“Back on the Train,” “Gumbo,” “Halley’s Comet,” etc.), but the cadence in Trey’s singing needed to accommodate the space of these songs when they’re stripped of his Phish bandmates’ vocals. At times, he turned to the crowd and generated sing-along moments (“Limb by Limb,” “Bouncing Around the Room,” a walk-off “Bathtub Gin”).

And the crowd dished the engaged, loving respect right back. For the most part, the audience remained silent. Sure, there was sort of an endless stream of people getting up and returning with beers, but that’s part of the flow. The crowd called out requests, and Trey took a few of them. At one point, it seemed like he interrupted a story he was about to tell to fulfill a request for “Fee” (and someone down on the main level of the theatre felt compelled to stand up throughout the song and yell the lyrics alongside Trey, the one overt show of obnoxiousness I witnessed).

Check out the full show right here. Read up on the full setlist below.

My favorite moments? Listen, I hadn’t seen Trey in this setting before, so I was thrilled to be able to catch a more contemplative version of his playing. I tend to think Phish’s slower tunes are some of their all-time best compositions, and yet they don’t serve them up on tour very often. I understand the need to keep up a high-energy flow at a three-hour Phish show—certainly no complaints here—but it’s nice to get those cool-down moments with stuff like “Fast Enough for You” or whatever. Trey didn’t play that one last night, but he hit some of his most delightful songs in the Phish repertoire: “Waste,” “If I Could,” “Mountains in the Mist,” “All of These Dreams,” “Strange Design.” Relative latecomers “Summer of ’89” and “Shade” provided two beautiful moments as well.

If it seems like Trey is busier than ever before, at least outwardly, to us fans, well, it’s true. Ever since the Baker’s Dozen, he’s launched himself at warp-speed into yet another creative wellspring in his career. At times, Phish isn’t even the most interesting thing he’s got going on. The Ghosts of the Forest project, TAB tour, the whole Kasvot Vaxt thing, the documentary, a recent appearance on Live From Here, the announced Oysterhead reunion, that time when he joined Tedeschi Trucks Band to perform the entirety of Layla And Other Assorted Love Songs. It’s stunning, really.

And, from here, looking ahead in 2019, Trey will join Phish for a quick seven-show fall tour before preparing once again for a four-night stand at Madison Square Garden, Dec. 28 through Dec. 31. This is how we set our clocks, after all, and there's something wonderful about how he hews to tradition while never repeating the same joke. The moment is created anew each time, for all of us, and then the moment ends.

The two songs that received a bit of the jam treatment last night were “Blaze On,” early in the set, and “Ghost,” with Trey setting a digital loop and then striking out for soulful lead work on guitar while occasionally echoing the words of the chorus. It was during moments like this when the lights would pick up a pick, flashing tie-dyed spectra or a deep, twinkling glow. More often than not, the rest of the show featured a full-color wash on the screen behind him—or a single spotlight. The feeling was intimate, and it was neat to catch a lot of these songs without the added thrill of Phish's lighting.

One of the other great things about these solo shows is that Trey can stop for a minute and share stories. Earlier in the tour, he'd already told stories about what Phish had planned for the late Curveball and how they partied at Paisley Park. Last night, Trey recalled the 8/7/15 show at Blossom, when he publicly wished for Ween to get back together. Of course, the following year, they did. Trey sort of went back and forth, deflecting credit for this wonderful twist of fate, but then he decided to give the magic of Northeast Ohio another try: Onstage in Canton, he wished for the original four-piece Talking Heads to get back together (!!!). Who knows? Maybe Trey has tapped into something deeper and more mystical about the concert vibe in our part of the country—something that everyone else has missed this whole time. This would seem to be in line with the guy's penchant for the transcendent.

Later, he described the Field of Heaven stage at the Fuji Rock Festival in 1999—a production set off to the side of the actual festival and based heavily on Phish's three previous festivals in the U.S. Phish performed exclusively on this stage and, in between sets, was left to look in from the outside on the Fuji Rock grounds. It’s worth seeking out the audio, but, trust me, it was an incredible story. Trey laughed his way through a description of drummer Jon Fishman in a massive cowboy hat, greeting production crew members who’d been dissing Phish all weekend, walking up to them in his dress and cowboy hat to loudly exclaim: “Howdy! I’m Fish from Phish!”

And then, as the weekend went on, the band maintained its little exile in the Field of Heaven while the Fuji Rock Festival surrounded them.

Trey insisted that this is how it's always been: Phish lives adjacent to broader cultural phenomena, but they remain on the fringe. It's sort of like the Rock and Roll Hall of Fame, he pointed out, adding that he'd visited on Tuesday. Phish is prominent in the lobby, but the band has never even been nominated for induction.

The joke is better that way, at any rate. The cosmic humor of everything we’re doing here, it’s sustained only by our ability to commune and laugh with one another. We’re all in this together. Your trip is short!

Setlist:
Snowflakes in the Sand
More
Waste
Halley’s Comet
Blaze On
If I Could
Steam
Water in the Sky
Mountains in the Mist
Back on the Train
Limb by Limb
Ghosts of the Forest
Miss You
Ghost
All of These Dreams
The Inlaw Josie Wales
Free
Theme from the Bottom
Bouncing Around the Room
Gumbo
Alaska >
Chalk Dust Torture
Fee
Summer of ‘89
Carini
Sleeping Monkey
Backwards Down the Number Line
Bathtub Gin

Encore:
Strange Design
Shade
Wilson
Say It to Me S.A.N.T.O.S.