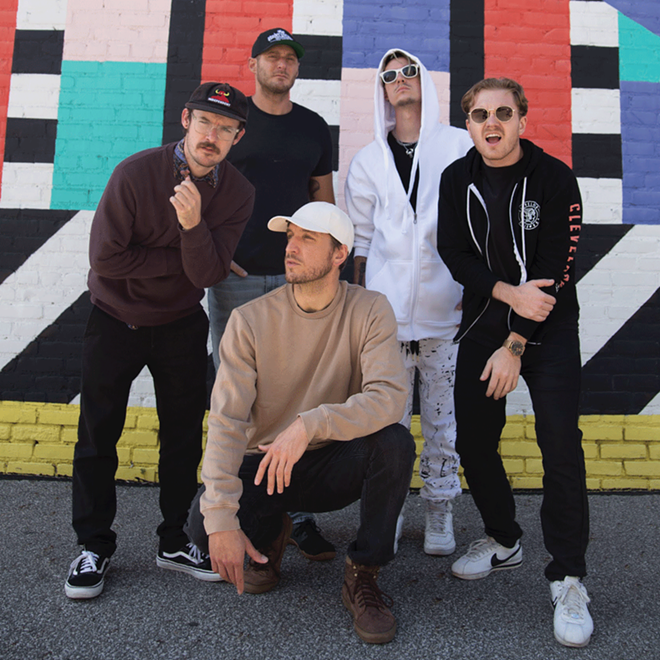 One of Northeast Ohio’s most successful bands, Tropidelic draws inspiration from groups such as Sublime and 311 and blends ska, hip-hop and rock. The band puts on its own music festival each year and has played Electric Forest, Vans Warped Tour, California Roots Music & Arts Festival and the 311 Caribbean Cruise.

At this point, it’s a national act.

So when the pandemic hit, the group had to recalculate its plans for what would’ve been a very busy 2020.

“Truth be told, we were very fortunate to stay working more than many other people were,” says frontman Matt Roads in a recent phone interview. To celebrate the new year, Tropidelic plays on Friday, Dec. 30, at the Beachland Ballroom and on Saturday, Dec. 31, at House of Blues. “We immediately stepped into the livestreaming thing and that did well for us for a while. We then did private parties during the summer of 2020, and we played any venue that would allow us to do a segmented show. We took on the drive-in movie theater concept and did that twice in Warren. We didn’t get stopped in our tracks; we did whatever we needed to do to stay moving. It worked out for us coming out of the pandemic, and we didn’t lose a lot of momentum.”

Roads says things haven’t entirely returned to normal and that there is still “a ripple effect of uncertainty” that has added a degree of difficulty to touring and performing live.

“But things are much more stable now,” he says. “Our Everwild festival [that took place earlier this year] was amazing. We moved it to Legend Valley. It was the biggest lineup we ever had. There were 3,000-plus people there. It was a great turnout, and everything went stellar.”

As a testament to the band's need to keep moving forward despite a music industry shutdown, the group went back into the studio immediately after releasing 2020’s Of Illusion to work on what would become All the Colors, an album that came out earlier this year.

“That was in our second COVID project,” says Roads when asked about the new album. “Of Illusion was the first one we did in the studio when we had much more free time, and it was the same for All the Colors.”

“It’s very, very Cleveland,” Roads says of the recording space. “I park next to the railroad tracks in front of tanker trucks, and there are chemical smells everywhere. There’s a bunch of rehearsal spaces in the building.”

Roads says that the album is still loosely reggae but has “veered farther and farther away.” “I wouldn’t call it reggae — not in the traditional sense,” he explains.

“Neighborhood,” one of the album’s highlights, draws equally from hip-hop and reggae. It features a funky groove that's buttressed by spirited horns and includes cameos courtesy of Prof and Krayzie Bone.

“That was definitely a pandemic-driven topical tune about being stuck in the house,” says Roads when asked about the track. “We had met Prof on the 311 Caribbean Cruise in 2018 or 2019. He’s just blown up since then. We had him in mind for it. We were thinking that Bone Thugs would be so clutch on it. In the final hours, we got Krayzie Bone, and it came together really well. It’s a fan-favorite for sure.”

Leading up to the Beachland and House of Blues shows, the band will perform in Cincinnati and Detroit, putting an exclamation mark on what has been a banner year.

“We’re pulling out all the stops this year,” says Roads. “The Palmer Squares [who share the bill for the House of Blues show] are an underground hip-hop duo from Chicago, and we have our friends Passafire [who play with Tropidelic at both at the Beachland and House of Blues] from Savannah, GA, and they came up the ranks of Warped Tour in the 2000s and are just killer. We’re stoked to be playing those shows at home, and it’s been a crazy last six or seven months. It’ll be great to end it in town and be with our families.”

The group will kick off 2023 by playing the 311 cruise again in March. It’ll then hit the road for a month with the reggae act the Movement and will perform on the Michael Franti cruise with John Butler, SOJA and other like-minded acts. Come May, it'll head to Nelson Ledges Quarry Park to play the Sunny Days festival, and Everwild will return in August.

In addition, the group is in the process of finishing a new album that Roads says will build upon the diverse sound found on All the Colors.

“I think we’re getting in our zone as far as what we’re comfortable with and what we can do with the moderate success we’ve had,” says Roads. “We’ll just do what feels best for us on the next album.” Coming soon: Cleveland Scene Daily newsletter. We’ll send you a handful of interesting Cleveland stories every morning. Subscribe now to not miss a thing. Follow us: Google News | NewsBreak | Instagram | Facebook | Twitter